Hatim Tai was the King of the Tai tribe of Arabia, who, as far as is known, died in 578AD. He was known for his generosity, and mentioned in some writings by Prophet Muhammad, as well as the Arabian Nights. 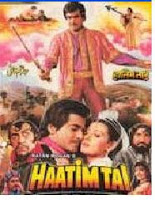 The movie itself is terrible- it is based on “Qissa-e-Hatim,” where a beautiful woman, Husn Banu, can only marry when the following 7 questions (that are more like random sentences anyways):
' What I saw once, I long for a second time.'
' Do good, and cast it upon the waters.'
' Do no evil; if you do, such shall you meet with.'
' He who speaks the truth is always tranquil.'
' Let him bring an account of the mountain of Nida.'
' Let him produce a pearl of the size of a duck's egg'
' Let him bring an account of the bath of Bad-gard.'

To help a prince who is in love with her, Hatim Tai (Jeetendra) decides to go find the answers to the questions. 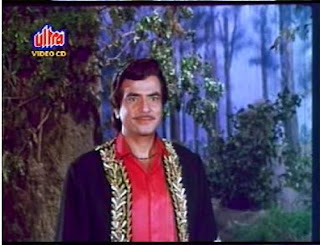 Of course he accomplishes his quest, and in the process, also gets the princess (Sangeeta Bijlani) of Paristan as his bride. 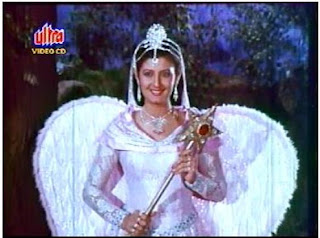 And we also have Amreesh Puri dropping in as the token villain of the piece. 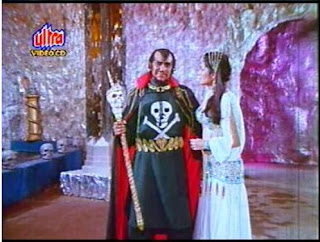 The “special effects” are really very special- they are so bad that they are laughable, even cry-able. This is just a bad, bad movie, and I could only finish it in 3 sittings :S I had picked up the movie simply because I figured it would have some camp value, but this is a true monstrocity, which you really do not want to subject yourself to. Watch it at your own risk!
Posted by Shweta Mehrotra Gahlawat at 11:17 PM

The Jairaj-Shakila Hatimtai of 1957 was a much better stuff. It was in colour too, if I remember it correct. I don't think that even in special effect department this 3rd Hatimtai has exceeded the first one. The older one was also a A-Grade stuff and had its premiere at the Novelty Cinema in Bombay. The songs are classic: PARWAR DIGAAR-E-AALAM TERAA HEE SAHAARAA and JHOOMTI HAI NAZAR besides others.

Just for info, the 2nd coloured version was the one starring Heena Kauser. No one remembers that. In contrast one at least remembers Hatimtai Ki Beti (Mahipal-Chitra) for the beautiful Naath: KAALI KAMLI WAALE TUM PE LAAKHON SALAAM.

Hatim Tai was a historical figure. During the time of nascent Islam his son had run away to Syria while his daughter was captured by the Muslims. The Holy Prophet (s) set her free and asked her to bring back her brother.