Oh God, what a crazy week- and so much more craziness ahead! I finally put in my two weeks' notice at the soul sucking sweatshop, got another job at another possible sweatshop. Also the seemingly futile search for a new apartment looms before me, while the entire week has gone by with me working on an audit in the thunder-storm laden South. But the day before I left town, I had watched the fabulous and cool Don with the fabulous and cool Bollywoodfan. 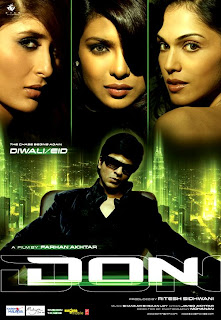 While it is a thorough entertainer: well crafted well executed, it took me still a while (2 years!) to see the movie, due to a fear of SRK from all the Karan Johar movies. But I began to come around to him this year, and when Bollywoodfan and I began to toss around the idea of a joint review of sorts, Don came to mind. You can read his detailed review here.

Comments:
1- Where Dil Chahta Hai (2001) was blue, this was a very "green" movie, with purple accents- symbolic of money, greed and power- or was the director really thinking that much in depth about it? We may never know, but after having seen it, I do think that all the comparisons with the 1978 Don are a bit pointless- there are huge technological advancements from the time of course, but the plot deviates enough to make the 2006 version as unique as it could hope to get. (Note to self: What kind of a dumb ass ambivalent comment is that anyway???)

2- The "jail" break in the plane was such a rip-off of Con Air (1997)- but it works! SRK owns the entire sequence. Hilarious bit (I found it funny, alright?)- once he jumps off the plane and lands in the middle of what is a very typical, Malay Bhumiputra kampung (village), the background music switches to Chinese music... especially odd since the 2 kids who witness his landing are also obviously Malay/ Indo-Malay. (Note to self: Even if the music was bhangra or Pagliacci, it wouldnt matter a whit- stop splitting hairs dammit)

3- Priyanka wears a skin-tight leather outfit when she rescues SRK in the middle of KL- how??? The humidity alone would kill the girl. And she pull the caper in relative peace- there is not a car in sight- all in the middle of a bustling metropolitan city. Bollymagic.

4- SRK and Priyanka are offered paan (betel leaf) in the Banarsi (Varanasi, UP, India) style, which leads to the whole " Chora ganaga kinare waala" song- which is weird, since you cant get a paan like that outside of U.P. (Uttar Pradesh), let alone abroad.

5- I had heard that the movie really showcased Isha Koppikar's talents- I guess I missed that. All I saw of her was smiling meaningfully, while dressed in frumpy outfits.

Pros:
1- Again, and I am getting repetitive, SRK, for all his arm-spread ham-iness, owns the movie.

Another man would appear effeminate in pink and purple (alright, he does wear green and black too), but not the Khan- he rocks out the purple velvet like no other, driving a purple car (!!!) while killing people left and right.

2- Chunkey Pandey in a brilliant cameo- somehow this man appears way cooler now, doing cameos, than playing hero in his hey day- maybe he just needed to get older and shift off the center of the screen...
3- Pawan Malhotra and moustache- I love them both, so they had to make the list.
4- Boman- no need to add more than this.
5- The country and the locales- Malaysia! This movie, coupled with a tie-up between Malaysian Airways and Indian Airways (or it may be Air India- eh) catapulted Malaysia into becoming the vacation destination of choice for what appears to me as the entire Indian nation :)

Cons:
1- HUGE plot holes- the biggest one being that the whole chase is supposedly after a teeny tiny dvd/cd- hello??? All Boman had to do (or Arjun or SRK) for that matter was make multiple copies of the thing. If it was encrypted, get a decent hacker, or a bunch of good hackers if need be) and cut that Gordian knot.

2- As funny was Pran walking the tightrope in the 70s version with 2 kids and a paunch, it is as hilarious to see a lame (not figuratively, literally) Arjun scaling skyscrapers- he is a programmer, not a gymnast, but I quibble..
3- Much as the costume designer loved SRK and Priyanka, he/she hated Isha and Kareena- terrible stuff that.

Pros & Cons:
1- Priyanka is gorgeous, ravishing, etc- but doesn't really have to do much- she is the one point in the movie that I tend to compare to the original, since Zeenat was oh about 2 million times cooler in the 70s version.
2- The songs- love the title and "Aaj ki raat" songs- not much else. I don't see the point of including the 70s versions in the movie at all. "Chora" adds nothing to the narrative- any song could replace it just fine. All "Ye Mera Dil" does is provoke comparison between Helen and Kareena, and of course Kareena falls short- not only is she being compared to Helen, but she is also dressed in horrible golden lamae.

3- #2 and #1 obvious lead us to note the fact the costumes were really cool, though more often than not, hideously dumb. As amazing as all the beautiful people look, they've all been dressed mostly in leather and velvet, which would make zero sense in the humid Tropical climate- linen or lycra would make more sense. (Note to self: Enough criticism- who's to say gangsters in hot and humid climes dont secretly wish to be stylish at the expense of feeling sweaty and sick? )

The one big flaw in the film, of course is - why would Don get excited about the paan anyway. In the original version, it was because he was Vijay. In this, not. So???

But loved the film. One of SRK's best, I think.

And yes, good luck with your new job and apartment hunt.

Shweta, hang in there honey. Apartments and better jobs always show up when you need them most (but sometimes not until you think you are past that point...but you aren't, if that makes sense) :-)

And Pran was wearing SHOES while walking the tightrope!!! :)

Paan is available in Indian stores here in Boston.

Banno: Maybe we are supposed to assume he was putting up an act for Priyanka's sake??? I really dont think this song was required here at all- they could put ANYTHING here- maybe a song about Malay Laksa? (rofl)Thanks for the good wishes!

Memsaab: you are so thoughful- thank you :)

Amit: Thanks for visiting! Absolutley- Paan is available everywhere- there are even frozen versions- but I will argue that the kind avaialble isnt Banarsi :) It is SUCH a minor quibble I know :B, but they madea a big deal of it in the movie, so by the same token....

I'm glad somebody besides me doesn't hate this movie. I love SRK in villain roles and thought he totally nicked it.

Ajnabi: SRK rocks villainous roles so well, he tends to draw the viewer to the dark side as well- so good :D

Bollyfan: exactly! yeh mera dil could have been better- even a shorter version of that duh gold dress wouldve helped. im w/ u on that meetha pan- someone get me to uttar pradesh like right about now.....:D

'Pehla Paan Phir Gaan' - those immortal words by Amitabh led us into the original's Khaike Paan with such gusto that comparison to the original is like you said, pointless. This was actually a good movie had I never seen the original. But the original was so over the top and oozing with the star charisma of Amitji & Zeenat that I just could not watch this one for what it was.

On a side note, me & a buddy went to the Alamo Draft House in Austin, TX to see the original on the big screen as part of their 'Tribute to Bollywood' week. The sold out crowd (mostly non-Desis) did not know how to react to all the madness but after my friend and I began to talk back to the screen "Tell Helen to get her aunty up there Don!" they finally realized that they were not to take this too seriously. As the movie went on the crowd got more & more into it and in the end got a standing ovation.

SRK's version, although it's a fine film, could never duplicate that feat. But again, comparisons are just pointless aren't they? ;)

boy, have i missed your posts...I'll be back soon, I am busy with work...long hours..too many of them at the moment. take care. i'll send that recipe over soon too. ;)

Sanket: I'd have love to have witnessed that screening- sounds like it was tons of fun! and yup, comparisions are pointless between SRK and the 70s Amitabh- both exhibited so much style that cannot be compared.

Trupti: Thats such a nice thing to say Trupti! Now try not to work too hard (look who's talking), and I will await that recipe- u paragon of culinary restraint u :D