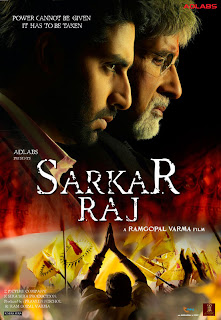 All in all, less than the some of its parts.

Picking up from where we left off in Sarkar , Shankar (Abhishek) has picked up the reigns of his dad Subhash's (Amitabh) power empire.

Anita (Aishwariya) is sent by her dad (Victor Bannerjee- I love I love) to establish a power plant. Shankar loves the idea and supports it, much to the chagrin of the villagers who live on the land in question, and do not share Shankar's vision.

Which is where I should stop talking about the story, since it would imply giving up the plot entirely. Lets just say there are bullets flying everywhere, much angst and blood, and tears all around.

Pros:
1- Everyone, individually, acts well- especially Abhishek, who has got that long slow, angry/smoldering stare of his down to perfection.
2- Brilliant camera work- Gritty as they are at times, scenes appear almost as beautiful as paintings.
3- Supriya Pathak and Victor Bannerjee do good with what they got- I wouldn't complain if we had been given more of them.

Cons:
1- Aishwariya's character could have been so much more than it was- she shows sparks of it here and there, but in the end, I just didn't think it was enough. In the beginning, during the meeting with her dad, she vocalizes that Qazi is negative- if she is a businesswoman, would she say that out loud? in front of the man?? It just appears childlike, petulant.
2- Shankar seems to pull Anita in his inner circle almost immediately- would that really be possible- especially since she is a business associate, not a politico?

General Musings:
1- I realize I wouldn't have Cons #1 and #2 with the movie if I viewed it as typical Bollywood masala- but Sarkar Raj tries hard not to be regarded as such, and if Ramu wants to be taken seriously, I'd think he'd want to better consider how he etches his characters.
2- The montages of bike-riding fundamentalists alongside Sarkar's cavalcade are very true to life. Having seen this when I lived in Bombay for a bit, those disturbing images came back, in an almost scary way.
3- I read in the Times of India that Jaya Bacchan loves the movie and has fueled the idea of another sequel. Which is all well and good, but I am not at all certain if the movie merits as much. It is good, but not brilliant, which it definitely had the potential to be. I couldn't connect with the characters- except maybe Shankar, a little bit. And in the end, it just wasn't enough. Ho hum.
Posted by Shweta Mehrotra Gahlawat at 12:55 PM

I have recently developed a severe allergy to Big B - he seems to push his way into every hindi movie in some form or other to such an extent that if I spot a movie without him, I like the movie for that fact alone! So, Sarkar I and II were never on my viewing list. From your review it appears that I havent missed much, which is a pity as Abhi-Ash is fun to watch.