OMG so many computer problems! My network at home is behaving really really weird, and only my husband's laptop seems to be dealing well with that- so using his to publish this post. 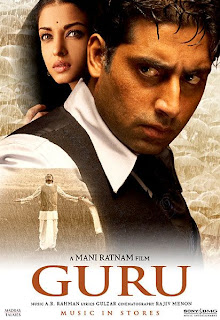 I think watching this movie supports the fact that I am becoming a better person :) Not only have I opened my mind enough to watch SRK, I have even begun to watch Aishwariya Rai. And gave myself every opportunity to love/like their performances.
Title: Guru
Year: 2007
Cast: Abhishek Bacchan, Mithun Chakraborty, Aishwariya Rai, Madhavan,Vidya Balan.

A poor Gujrati boy, Gurukant Desai leaves for Turkey in his teens so that he can earn rather than study further.

Fast forward a few years, and our boy has turned into Abhishek, on the brink of heading home and starting his own business.

Back in India, he finds he really doesn't have enough cash, and therefore chooses to marry Aishwariya for her dowry- hah! looking at her, I highly doubt anyone would marry a girl that good-looking only for money :S

The newly-married couple heads off to big bad Bombay, and begin to love each other. Aishwariya looks gorgeous in sarees and takes care of home, while Abhishek struggles in the market place.

Pretty soon, the struggling Abhishek meets Mithun, a newspaper editor, who initially helps him by printing stuff against the large-statured Bombay businessmen who don't allow entrepreneurs into the market..

Years pass, and Abh-Ash have a successful business, and look as beautiful as we expect them to do in real life, 30 years from now...:)

Things have soured a little between Abhishek and Mithun- the latter doesnt approve of Abhishek's business mantras, and their arguments are refereed by Mithun's niece, Vidya.

And Abhishek gets a paralytic attack after Mithun instigates a media-fuelled government investigation against him and his businesses..... (Aishwariya is SO lovely here!)

Under full investigation by the Govt.'s tax group (headed by Roshan Seth- love)...

...and highlighted in the media, can Abhishek come out the winner ?

Pros:
1- Abhishek does more than brood, and acts remarkably well...
2- ... as does Mithun, who is absolutely in his element...
3- ... as does Aishwariya, who looks amazingly elegant.
4- Very fluid, well-synchronized cinematography and direction.

Cons:
1- A severely underused Madhavan. This guy has been SO underutilized by Bollywood... tsk. ANYONE could have done the role he was given :S

Aishwarya and Abhishekh were lovely in this film. You could feel they would make a lovely couple in real life too. The one track I hated was the Vidya Balan one, a bit corny and distracting. Madhavan came as a relief in that track, though I agree he has never got his due in Hindi films. As yet.

Mind blowing performance by Junior AB.Mithun is also solid like every time.Ash is looking so beautiful that any guy can woo her."Barso re megha megha" is a nice song.

So does Madhavan play the newspaper editor? I've heard this is a good movie--it certainly seems like you liked it!

Banno: Yes I do agree- if we completely remove Vidya's track. there really is no change to the original plot- so definitely an unecessary add-on. Poor Maddy- I do think he is really cool :D

Crazy on Bollywood: thanks for stopping by!

Ajnabi: Mithun was the editor and Madhavan was one of his reporters. this is dfinitly a good movie- I find all of Maniratnam's movies are really engrossing, whether they may have as much substance or not.

This was certainly a great watch. As one who'd run miles from Mani Ratnam's earlier Hindi ventures, I was pleasantly surprised at how coherent and interesting the movie was!

I really liked the Vidya track, too - it introduced a softer side to the ambitious Guru and fleshed out the Mithun character by providing an insight into his life.

Bollyviewer, I actually find Maniratnam pretty good. The 1 usual problem in his plots is that the conflict (and there is always one) is resolved almost instantly, and one doesn't really get a sense of the struggle the protagonist/s may have endured. I've never had too much of an issue with this since I like the way his narrative flows, and enjoy the pretty camerawork :D

Shweta,
I am also having computer problems as of late, so I especially appreciated your post. I loved this movie and am glad to be reminded of it from you here. Glad you're opening your mind to the Aish world. ;)

I love that song "Barso Re" I did a post on it here:

And like bollyviewer, I liked the Vidya track, and even used it as a tribute for my friend's cat who died in this post:

Hi Shweta,
Just to say that I've been through your list of reviews and I've found that Guru is the ONLY film we've both seen: amazing, huh? I mean, I've been watching all these Indian movies for three or four years now, and you have watched many many too... there is just SO MUCH material in Bollywood that people like us can actually not have seen a single film in common (or nearly)...
Just wanted to share that with you!
bye for now,
yves

Yves: THAT IS pretty amazing! But I have a feeling we have seen other stuff and not written about it. Like I've seen Sahib Bibi, Aag, Aawara, Pyasa, Shree 420, Guide etc- just never writtern about them. And I adore GuruDutt, so yes, you make me realize I need to show him more love :D And one day, we should see a movie together- in LA, France, India or somewhere in between :D