Pirates of the Carribean 3- finally 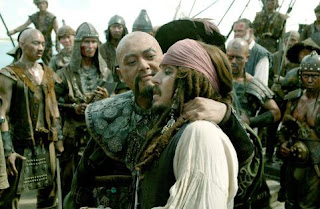 So here I am, having flown over 2/3rds of the country, in Tennessee for my client. The hotel, crappy as it is, is perhaps the best in town, and the food is definitely good (for once- soup that's NOT bland), plus we have Internet- so no complaints- just miss the hubby painfully much-
oh 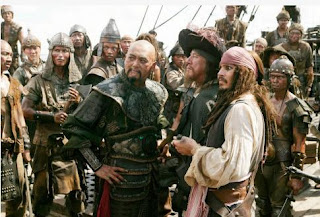 well- back again in a few days.
So I saw "Pirates.." almost 2 weeks ago- and wasn't dazzled in any sense of the word. The supposedly last part of the trilogy (and I MEAN "supposedly) picks up from where the last one ended. After the motley group of pirates headed by Elizabeth (Keira Knightly), Will Turner(Orlando Bloom), and Captain Barbossa (Geoffrey Rush) rescue Captain Jack Sparrow (Johnny Depp) from the the land of the dead (this takes longer than my description), they must face their foe Lord Cutler Beckett (Tom Hollander). 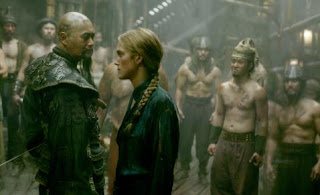 Beckett manages to take possesion of Davey Jones's (Bill Nighy) heart, compelling him to join hands with him. Beckett's goal: to wipe all the pirates off the face of he world's seas. Our heroes get together to summon all the Pirate Lords from the four corners of the globe, including Sao Feng (Chow-Yun Fat). The Pirate Lords, with the persuasion of Elizabeth, Sparrow and Captain Teague (Keith Richards), consent to release the goddess Calypso, Davey Jones's damned lover, from the bounds they had put her in years ago. 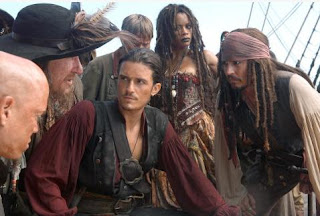 So of course mayhem ensues, and there is drama on the high seas with battles galore. Of course the pirates defeat the British Navy(would we have dared assumed otherwise?), and the heroes triumph in the end.

Now the problems: As entertaining as Mr. Depp is, he amuses only so much- you get somewhat tired in the middle of the movie- we have seen most of the same action already in the 1st two movies. Keith Richards's much publicized cameo as Sparrow's dad has been talked about to the extent that it fails to thrill when we actually see 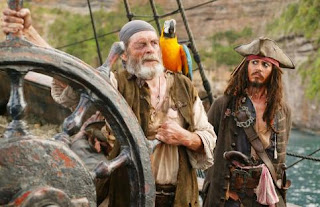 it. And the director is NOT winning any brownie points with the female audience by the whole star crossed lovers thing with Orlando- we do not like to see him in any pain! Worse still- why the heck get in Mr. Fat Chow if he is to be killed off in less than 6 scenes?!!

All in all, the movie is as expected, except of course the twist in the end with Orlando and Keira, and the whole Calypso release sequence. If you have seen the 1st two, of course you want to see the last one (allegedly- I'm definitely not convinced). Psst... Bill Nighy looks very sissy 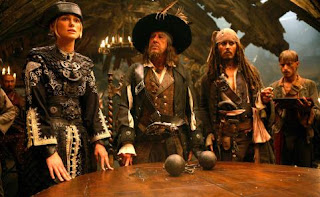 without the Davey Jones makeup...sorry!