The 60s were the best time to be alive. Spies and hippies filled the movies, and there was a almost naive belief in universal love and freedom of the individual. This infectious global attitude also affected India, who was just beginning to acquire a taste of the freedom she gained in '47. Case in point: Guide, Bhoot Bangla, Waqt- all three of which had different social messages, but none escaped the camp-iness of the swinging 60s (some more than others: Bhoot Bangla was just campy fun sans social messages. I need to get that in these pages too- its a blast!).

But I digress. After a great opening number "Jaan Pehchaan Ho" ("lets get to know each other"- aptly titled, since the protagonists soon get to know each other more than they want to) in a night club, seven patrons(five men and two women) are told they have won some random contest, which entitles them to visit someplace on a plane ride.

Our protagonists get aboard a plane and find that its just the seven of them in it- no other travellers, except the pilot (Manoj Kumar). The plane promptly flies and then even more promptly requires to make a deserted landing on a supposedly deserted island. 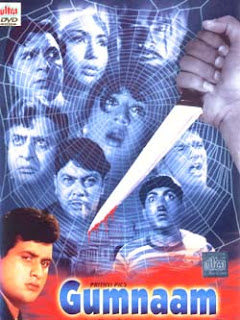 Our heroes search the island and find a mansion, upon entering which they find a mysterious but comic butler (Mehmood, once again the vidushak). Mehmood promptly informs them that they are indeed expected, and presents them with a little black diary which announces each one of our travellers to be murderers, who have been expressly bought to the island to be offered their just desserts. All eyes fall suspiciously (and I can see the literal visual of this phrase- eyeballs randomly falling- eugh) on Manoj, who as the pilot, has to have known to steer them to the island. 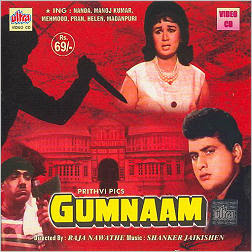 Manoj pleads innocent, but in the course of the next few days, members of the party begin to die off one by one. Is the murderer one of them, or hiding on the island? While I never hesitate to give away plot point, on this instance I will hold back- this is a movie you really must see! 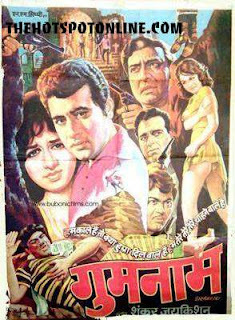 To anyone familiar with Agatha Christie's literary works, it will be obvious that Gumnaam was inspired from her classic And Then There Were None, also known as Ten Little Indians. The novel has inspired many movies, in the spirit of Christie's Mousetrap. Gumnam takes good inspiration from the novel, but puts in way more romance (Manoj and Nanda) than, in my personal opinion, was required. They perform the requisite song in the rain, and Nanda just gets on my nerves with her shriek-y voice, as she manages to in every movie I've seen of hears (thankfully very few). On the other hand is Helen, looking ravishing as Kitty Kelley, dancing on the beach much to the delight of a leering Pran. She is a treat to watch, and I love watching both her and Pran. Manoj is a ham, but is way easier to watch in this movie where all the attention is not focused entirely on him. 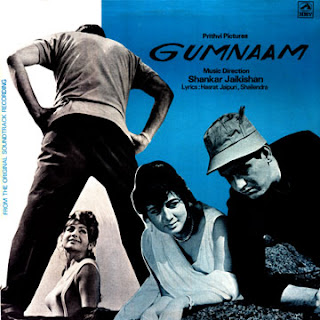 Note: I found all these great posters and record covers of Gumnaam online, and decided to use them in this blog- love 'em!
Posted by Shweta Mehrotra Gahlawat at 10:55 PM

Hi, great blog. I just watched it yesterday. I love the look of it, it looks like a fake reality. Anyway keep posting! Thanks