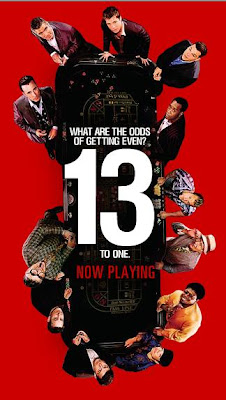 When one's of Danny Ocean's (need I say? OK: George Clooney) own: Reuben Tishkoff gets duped by Willy Banks (Al Pacino), to whom he looses some prime Vegas property, and lands in the hospital with a heart attack. Danny and his crew are out for revenge, and oh what a ride....

Sure, this isn't a cinematic masterpiece in any sense of the term. But who can resist Danny (Clooney), Rusty (Pitt), Lenny (Damon) and the gang getting together once again, sharing space with Pacino and Garcia? 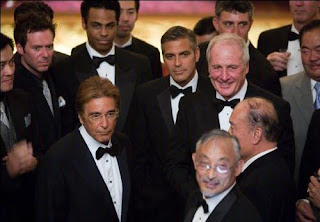 Danny and crew decide to do everything within their powers to not only shut down the casino that Willy has built on Reuben's land, they also decide to rob him while they are at it, make him bankrupt, plus steal diamonds for Terry Benedict (Andy Garcia). Aside: In a prequel, Danny and Terry were adversaries, but here they collaborate against their one enemy: Willy.

Do Danny & Co. win the day? Of course, and that is a foregone conclusion. The movie is simply an exhibit of Mr. Clooney's charisma, accented by Brad Pitt's handsomeness. The two best scenes in the movie (in my not so humble opinion) involve only the two actors; 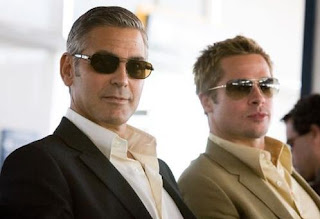 Scene 1:
Rusty knocks on Danny's hotel room door.
Danny opens it, wiping his eyes.
When Rusty asks, Danny explains it was something in his eye....when Rusty overhears "Oprah" on the living room TV. Incredulous, he asks Danny if we was crying while watch Oprah- and then himself is caught up by the show, sniffing right along with Danny.....

Scene 2:
The end of the movie- Danny and Rusty at Vegas airport.
Rusty ribs Danny about having gained some weight in the midsection.
Danny advises Rusty to "get married, have a couple of kids" - and here we can insert innumerable Angie Jolie & the kids (during the filming, there were still only two) jokes.

You KNOW Clooney fills a tux like no other man on this planet or beyond- see it!
Posted by Shweta Mehrotra Gahlawat at 11:21 PM