Religeous movies are made differently these days... 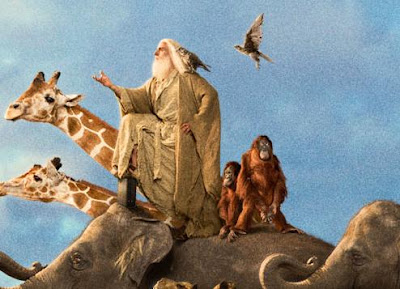 Yup, they sure don't make religeous movies like they used to. Back in the Protestant Christian school I went to from Standards 1 to 12, we were required to watch The Ten Commandments and Ben Hur once a year every year, and the movies were both engaging and dare I say- heavy. Its hard not to compare Evan Almighty to them, especially since despite its comic trappings, the movie has a pretty strong religious core.

Evan Baxter (Steve Carell) is an ex-TV Newsman, who has just been elected Congressman. His first day in office finds him with a message from God (Morgan Freeman) to go build an ark. At the same time, the evil heavy Congressman Long (John Goodman) next door wants his aid in deforesting and building over grounds that would further destabilize the environment.

So of course, after initial reticence, Baxter builds the arc with the help of his wife and 3 sons, who also initially believe him as crazy and then gradually come around. The flood, when it happens is a fake out really- the local dam breaks, and the strength of the waters bring Baxter, riding his arc with all the animals, to Capitol hill. 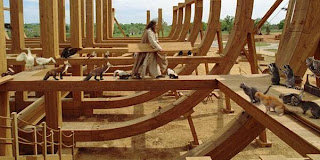 Its funny in parts. But there are so many loopholes in the movie that even Morgan Freeman's cool God act cant redeem it. Honestly, if the flood was only going to mean a dam burst and a ride to the Senate, then why did ALL the animals in creation have to come in pairs to inhabit the ark? It makes no sense! So fine, even if we assume this is because God works in strange ways- and I am always eager to agree with that reasoning, even then the director cannot be easily forgiven for all the wastage of talent. Steve Carell and Wanda Sykes gets to showcase themselves- Steve completely, Wanda not so much; but Molly Shannon and John Goodman are utterly wasted. Still, its a good watch, a must-watch if you love Steve and Morgan, as I do.