Fantastic Four: not very fantastic at all 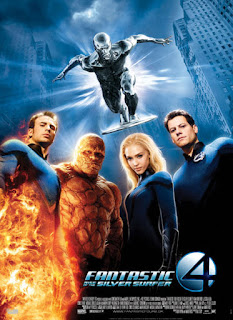 I always LIKED the Fantastic Four- specially Ben. But both the parts of this movie, #1 plus the current sequel, lack the energy essential to making any movie go from OK to WOW. Everyone, with the exception of Ben (Michael Chiklis) seem to be so uninterested in what they are doing: Reed (Iaon Gruffudd) lakes presence, Sue (Jessica Alba) is good only at pouting, Johnny Storm (Chris Evans) just hangs with babes- so whats so special about that?

Actually, nothing is special about that, and by the same token, nothing really stands out in the movie except Ben and the Silver Surfer. Which is hilarious, since both actors are augmented by special affects, and still surpass the others who have the liberty of using their real faces for emoting but cannot emote! 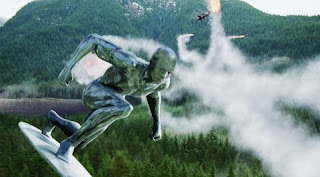 The story in a nutshell (if you really care): The Silver Surfer(Norrin Radd) is sent to Earth by some unseen power. His goal is to destroy the planet, as he has done every one of the planets he has visited. 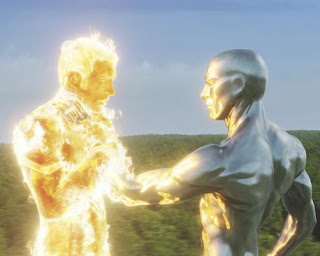 He couldn't have come at a worst time: Reed and Sue are finally getting married, Johnny is super comfy with the endorsements he has accumulated and Ben is happy with his little blind girlfriend. The Fantastic Four are plagued now, not only by the Surfer but also by their former enemy, Doom, who has made a comeback from the dead.
So do our heroes win the day? - Yes of course.
Do we care that they do? - Ummm...not so much.
Why? - Wellll....there is just no passion.
Like I said before, nobody seems to care what the heck they do. Nobody looks like they are having fun- and that truly is important in any movie. The campiest of movies have worked simply because the folks acting in them are just having a ball, and the viewer gets caught up in the infectious euphoria thus created: case in point, Shaun of the Dead, which lead to the recent Hot Fuzz, covered elsewhere in these pages. The sheer lack of energy kills the movie for me. Perhaps the highlight was he point where Ben and Johnny find out that they can swap powers: 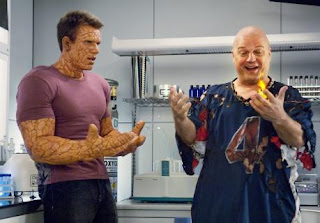 That's really about all there is- watch it only if you must.
Posted by Shweta Mehrotra Gahlawat at 12:13 AM