Yes Beth, I kept my word.
I pushed into my DVD player what I thought had to be the worst of the Mithun movies I had bought in India.


And guess what? I do believe I was correct in my estimation. This movie is so awful that even IMDB does not list it! Scenes spill on to the screen without explanation, and you don’t quite get what the heck you are watching until the very end- and by then it really doesn’t matter any more. Remember, the key word in this review is “abrupt”- count how many times I have used it in this post…it’ll help pass the time. :) 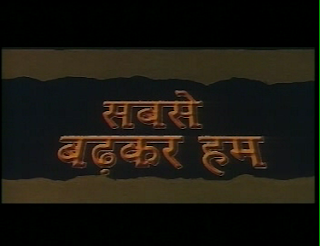 The 1st scene shows us the traditional bad guys we have seen before in countless other movies, sitting around a “havan,” (a small prayer fire), praying for the souls of their sons who died 20 years ago. 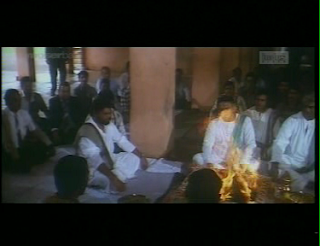 The 2nd scene jumps wildly to the police commissioner’s office- where the chief has apparently just let the town drunk/madman into his office, because he is sorry for him (huh?). 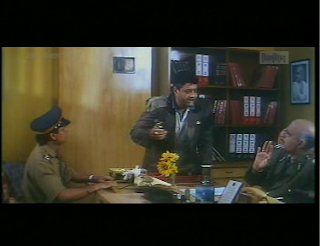 While doing his strange good deed of the day, the police chief also has informed us that he has invited Inspector Amar (Mithun) to town to help clear out the 3 bad guys’ (whom we met earlier) operations. On cue, and another abrupt jump cut later, we see Mithun beating up random guys on the street. 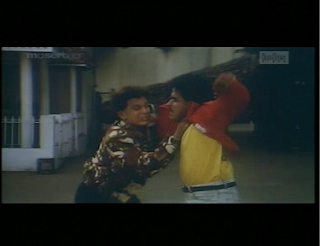 Keep in mind he is supposed to be tops 30 here (looks 55+, which he truly was then). Also he is out of uniform while whacking folks in broad daylight…whatever. 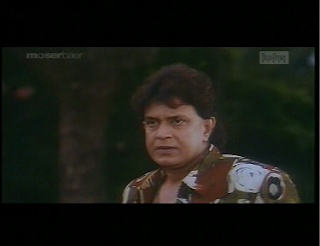 Another abrupt cut later, he lands up in front of the 1st baddie, and hauls him to jail. 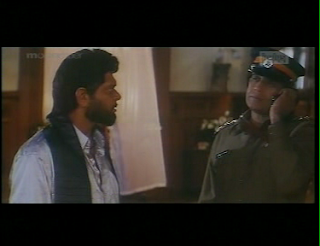 Jump to another abrupt scene- woo hoo- we see that Amar (Mithun) has a girlfriend who sits on his lap- he looks sooooo uncomfortable here- she must be really heavy- and he was pretty old by then… :) 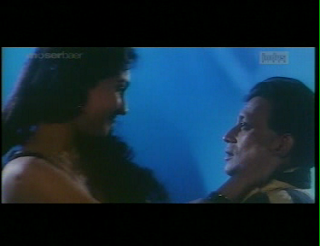 For some reason, the 3 baddies resort to driving through the streets to find the right street fighter to kill Amar. They come upon this fuggly man… 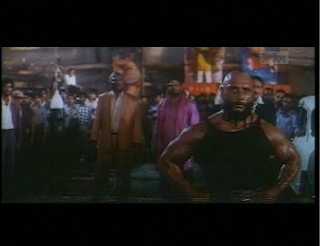 Whom they ditch in another second, when they find Raja, who appears from nowhere at all to beat the former to pulp… 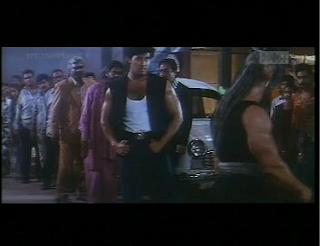 Still with me? Very well then- in ½ a minute Raja is in cahoots with the 3 baddies, but no body seems to be inclined towards killing Amar anymore. Whatever. Instead, Raja seems to be reoccupied in clashing with Guru, who has also been abruptly (here's that word again!) introduced in the movie. 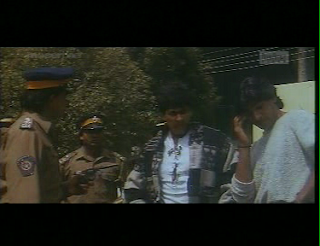 There are SO many useless characters in this movie- oh God oh God- YET another character is introduced: the police chief’s daughter, who wears strange electric blue bicycle shorts (remember those?) throughout the movie, is apparently in love with 1 of the guys. She (and us) is also regaled to the story of the drunk/madman’s life. 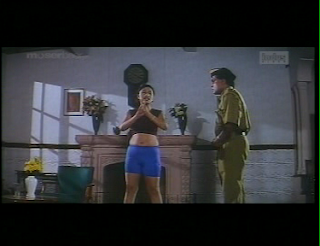 Turns out the 3 baddies killed the drunk’s wife and 3 kids 20 years ago- because he had refused to join their business (huh?). He lost his sanity in the process. 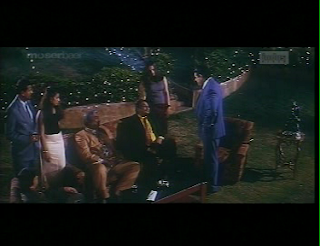 Just when you are really tired, Amar’s girlfriend is blown up by the bad guys (God let this DVD end now….). Here she is, giggling w/ Amar in a matching tracksuit before she dies... 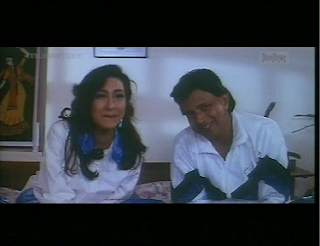 Things come to a head- the 3 baddies’ businesses are wrecked by Amar (vengeance etc.). They run to the BIG bad guy whom they have NEVER met before for help….And find out it is the dunk/madman is the Big bad guy. All together now- woo hoo!


So big bad guy informs the 3 baddies that he was the one who had blown up their 3 kids (remember scene 1? I don’t either) to avenge his family’s death. And helping him throughout were his 3 sons, who were miraculously saved from the 3 baddies’ attack- now grown into Amar, Guru and Raja (all policemen- the last 2 are incognito).

Just when you are about to pipe up, “but…. 20 years of planning revenge and living on the streets? Just ‘cos he killed your wife?? Huh???” – another scene moves in on you- the 3 baddies have captured Amar, Guru and Raja and are about to blow them up (3rd murder-by-dynamite plan due to happen…if you are counting).

With the 3 young (?) men in shackles before him, Big bad guy/madman/drunkard shouts out that--- he was just kidding- his kids did die in the attack after all, and all he did was kidnap and keep the 3 baddies’ kids for 20 years, so that he could show the 3 baddies that nurturing is more important than the family you come from (what the helll???????). 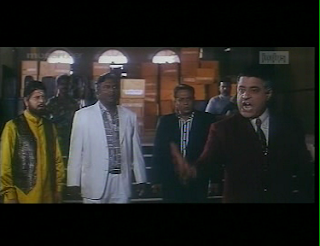 That’s it- the 3 young men throw their dads in jail, and live happily ever after with big bad guy/madman/drunkard- and of course, Mithun’s girlfriend is still dead. :) 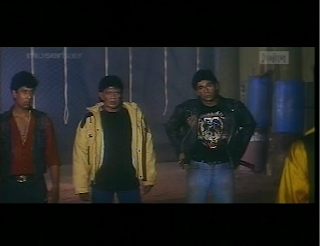 Notes: This is just so draining to see and write about. I am simply glad to have survived it!
Posted by Shweta Mehrotra Gahlawat at 8:45 PM

I award you the The Taurus World Stunt Award for surviving the pain.
Maybe on your next visit to your dentist you can forgo the anaesthetic to compare if it hurts less than this ;)

Thank you- I was trying to recover when I saw a non-Mithun starrer that was almost as bad. Reports of that coming up soon.......:D

Oh no...sounds awful! You definitely deserve an award. The Mithun-loving friend I sent your blog to will, I hope, soon start lavishing on you the praise you deserve for surviving and reporting back on movies like this.