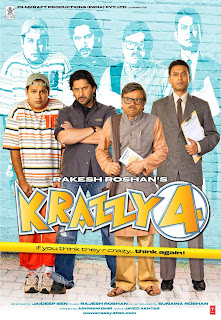 This one is perhaps the best of the on this post; which isnt saying much for it at all. 4 Inmates from a mental asylum, Suresh, Arshad, Rajpal and Irfan, are being driven to town to watch a cricket match by their doctor, Juhi.

The sentence above sounds ridiculously implausible, but nevertheless, that is the premise the movie begin on. Sigh.

Juhi is kidnapped, and the 4 inmates basically bring about her release and go back to the asylum. End of story.

The best we can say about "Krazzy 4," is that it is in the tradition of the recent spate of black comedies that Bollywood is experimenting with, and is definitely a different take on the plot de rigueur offered by the industry. But it doesn't work- the execution is disjointed and without finesse.

Even the production house must have been unconvinced by the final product, since Hritik, Rakhi Sawant and Shahrukh were all roped in for 3 separate item numbers. The songs dont save the day for the movie though :) Another serious error was having Suresh play a mute for most of the movie; the man is really good at stand up, and to not have him speak is a complete waste of his talent. I have no clue why Irfan is in this movie or "Tulsi" (below)- I guess he needs to turn a buck and make money while he can, but this is just a bad career choice.


Speaking of bad career choices bring us to our next howler: 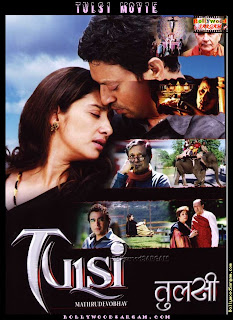 Manisha: A beautiful woman who dazzled us in "Dil Se" and "Bombay."

Irfan: A really good actor when he wants to be; I will always love "The Namesake."

These same two people could not save "Tulsi," for the simple fact that this is probably the most depressing plot ever written in cinematic history. Manisha is the titular Tulsi, an orphan who married Irfan who was from the same orphanage as her. She teaches there, while Irfan is a trucker, and they have four kids (yep, four- wth).

Irfan is an alcoholic, and Manisha suffers in silence until she gets blood cancer in true Bollywood tradition. She has 3-4 months to live, and Irfan tries to mend his ways, but is murdered by a fellow trucker. Manisha puts all her kids up for adoption, sees them go to decent families, and dies. That's the story.

Rofl- its so tragic that I am speechless after having written the above down. Seriously- I have no idea what the point of this painful exercise was- why did they make it- why did I watch it???? This movie is ear-bleedingly dumb; no redemption comes from any direction :)


And so let us get on to the next one: 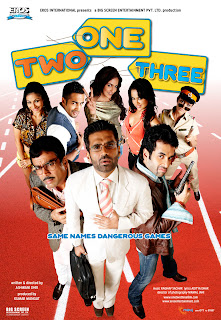 Back in 2000, Priyadarshan made a really funny movie, "Hera Pheri." This somehow compelled other movie makers and Priyadarshan himself to repeat the formula, using 3-5 male actors along with some female actors who would have little to do in the movie, essentially a comedy involving heists of some kind.

The problem is that it has been 8 years since, and folks are still making movies using that same template. Most of these feature Paresh Rawal, who still manages to draw a few laughs. And that folks, is the essence of "One, Two, Three."

Paresh (a merchandiser of women's underwear- har har de har), Sunil (a 9-5 office worker) and Tushar (a hitman on his first job) all have the same name: "Laxmi Narayan," and all stay at the same hotel in Pondicherry. Each gets a message- by courier, messenger and fax that are meant for another and much hilarity ensues. Oh, and I forgot to mention that a diamond the size of a pigeon's egg is in the foreground of the movie, which the entire cast is gunning for (the diamond, not the movie :D)

The dialogs are full of sexual intonation, but the comedy does work- in part. The comedy still doesn't make this a must watch movie, however. Good thing Sunil has a burgeoning business- Tushaar should learn from him and work with his sister's production company, and stop acting altogether- seriously :)


And the last contender for your attention today is: 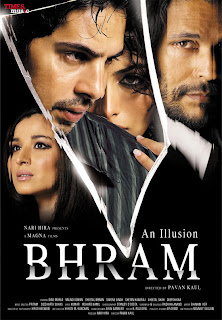 This movie tries so hard- it really does. Good, even great cinematography, handsome frames, good looking actors populating those frames, mouthing dialogs which range from inane to sexual to profane- the whole tries to be a provocative package, hoping to incite some reaction from the viewer.

But the only reaction it inspires after a while is that of boredom. Which feels wrong, since I really do find this set of actors really highly decoratively good looking! Milind was the hottest model of my teenagehood, and Dino was nothing to sneeze at either :D But good looks do not good actors make.

Dino and Antara meet and fall in love, even though Antara appears a bit unbalanced. When he finally bring her home to meet his brother Milind and sister-in-law Simone, she completely freaks out and accuses Milind of having raped and murdered her sister 20 years ago.

The movie constantly shifts between the past and present, which is a good plot device, but doesn't save the movie. Lets just cut to the chase and say that Milind eventually ends up confessing he did in fact rape Antara's sister, but it is also revealed that she died in an accident immediately after. Nevertheless he shoots himself, and all are left weeping behind.

Ughhh- and Dino is supposed to still get together with Antara after all this???? and how coincidental that she just happens to date her sister's rapist (and ex boyfriend)'s younger brother 20 years later. Fun fun.


And in conclusion: Bad movies can happen any time to anyone. Watch what you watch :D Heeh.
Posted by Shweta Mehrotra Gahlawat at 11:13 PM

Watched K4 and 123.Tre is nothing in the movie K4 except Hrithik's fabulous dance and 123 movie is totally entertaining.By the way renaming is good.

:-D Sounds like your tolerance for being flogged by bad films is even higher than mine! I did not think such a thing was even possible.

At least bad movies do make for good blogging, if you can tolerate thinking about them that long :-)

Thanks for visiting folks!
I may have missed out on the good in "123," maybe because I fast forwarded my way through all four of these- which is the only way I could tolerate 'em Memsaab :)

Gawd....Tulsi and Bhram...not very appealing at ALL. Thanks for saving me the courier charges. I was going to order those movies, I'll still order '123' though. Paresh Rawal is still a fav.

Yeah really diappointing- Tulsi 'cos I honestly expected a tad more form those two,
and Bhram 'cos the cinematography is seriously very good.

123 is reasonable- as long as u concentrate on individual jokes/gags and not at the whole picture. Also, Upen Patel's diction has improved and Tanisha is not too annoying, if that helps :D

Great review. Looks like thats 4 movies I can cross off my "to watch" list. I had such high hopes of Krazzy 4 and 123, too!

Oh I believe each one is watchable all right- as long as my finger is firmly on the fast-forward button! :) Thanks for visiting!

Saw Krazzy 4 and I dread the rest and will stay away since, as you say, 'this one is perhaps the best...which isnt saying much for it at all'. :)