Another Navketan movie, House No. 44 could very easily have been named Baazi II, were sequels popular at that time. The principal actors were the same, and the plot was fairly similar as well. Unfortunately for Navketan, Guru Dutt had no part in the making of this movie, and I seriously missed his touch here.

Ashok (Dev Anand) is a petty thief, who shares his spoils with other impoverished folks living on the streets of Bombay, chief among whom is this remarkably non-annoying, cute kid. 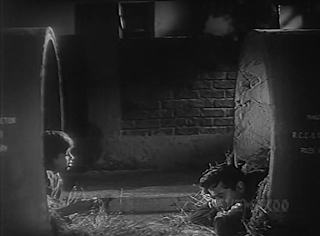 He is attracted to a girl, Nimmo (Kalpana Kartik, looking better than Baazi, but still very fugly), but is far too impoverished to harbor romantic dreams. 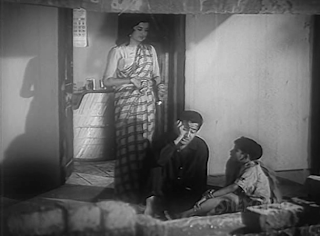 Tired of poverty, Ashok begins working for a smuggler, Captain (KN Singh) who operates from the titular "House No. 44." 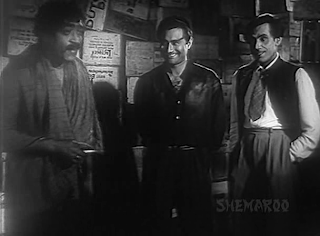 One of Captain's cronies, Sunder, kills Nimmo's dad accidentally (it is wonderful how incidental Bollywood can be). 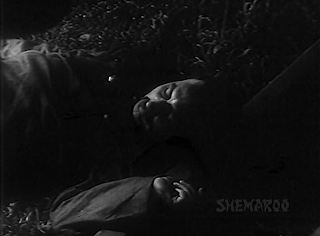 Sunder runs away from the crime scene, and then later shows up to console a grieving Nimmo with his mom. 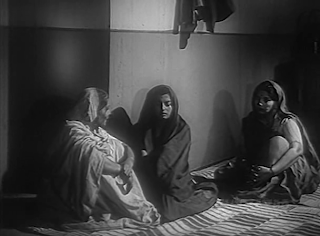 They bring Nimmo to their home, since she has no where else to go- no one knows that Sunder was behind the murder, but the police has its suspicions.

Ashok begins to make money, and begins wooing Nimmo, with the usual song and dance... 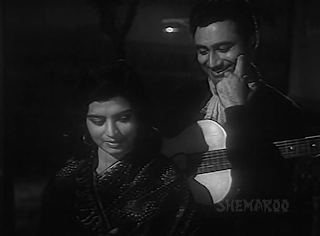 Sunder is trying to win over Nimmo as well, and one day reveals to her that Ashok is a smuggler working with him. 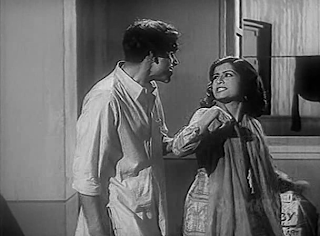 To appease Nimmo, Ashok walks away from a life of crime, but now Captain and Sunder are both after his life... 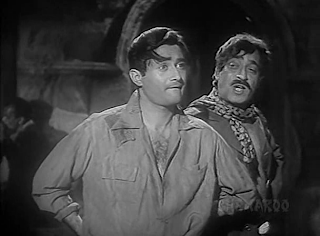 Struggling to live with Nimmo in a life of extreme poverty, Ashok squeals about Sunder to the police, and gets 500 rupees for being an accurate informant. 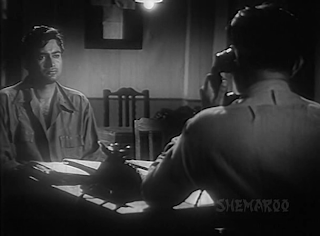 But when the police go to capture Sunder, he dies in the resulting crossfire, 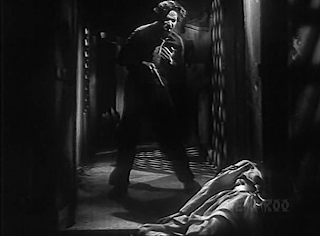 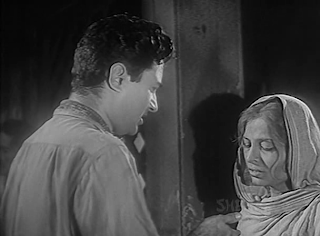 ... and in a fit of guilt, gives away most of his prize money to another poor man (Rashid Khan, in one of his endless Navketan cameos). 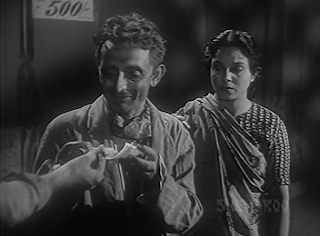 In a final showdown, Ashok and Nimmo are caught in a shootout between Captain's gang and the police, but is saved (of course), and they live happily ever after (how??? we are never told, and it appears that Ashok is back where he started from- on the streets, jobless, and with Nimmo to support instead of the kid...ah well). 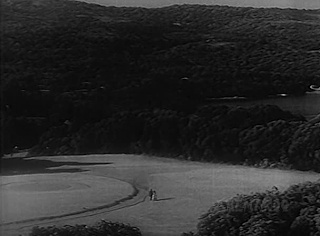 Pros:
Quibbles:
1- KN Singh doesn't get enough screen time- scary as he was, he was a pretty good actor, and "House" doesn't give him enough opportunity to fully show off his skills.
2- As mentioned above, there are far too many parallels to Baazi, which prevent me from fully appreciating "House."
3- Where the heck did Dev's sidekick kid disappear to? He makes a brief comeback in the middle of the movie, and then leaves inexplicably again.
Posted by Shweta Mehrotra Gahlawat at 10:01 PM

Oh wow! Didn't even know there was a film called "House no. 44". Lovely title. The first photo you've put up in the post is really striking, and you can see why Dev Anand was such a big star.

Hi Banno! Yes it was a bit of a surprise to me- I'm becoming somewhat of a noir hound, and Dev has done some pretty good stuff there- v different from what other actors were doing at the time, and definitely giving new direction to Bollywood.

Hi Shweta! Just discovered your blog and love your selection of movies! I always wanted to watch House No. 44 mainly because of the songs but never got round to it. Guess this is one Dev Anand starrer that I can easily give a miss! Dev Anand certainly believed in giving cinema a new direction. Have you seen his "Bombai ka Babu"? It had Dev's character falling in love with his supposed sister and is still considered pretty bold.

By the way, is the first pic an image of the actual movie poster?

Hi Bollyviewer:
Thank you for the compliments and keep visiting!
Yup its an actual poster- love the feel of the artwork; I trawl the net for these :)
House#44 is not a bad movie- I guess I just saw it too soon after having watched Baazi- I had no idea they would have such strong parallels. I saw BB as a child, and dont really remember it- thanks for the suggestion- will hunt and watch!

I think you mean KN Singh not Saigal? but in any case I love him too. He's so suave!!!!!!! and therefore can be really creepy too.

Heehee- of course you're right membsaab- fixed it imeediately- thanks! I do love him too- he was so silently menacing, and subtle at a time when everyone else was so over the top (not that that is necessarily bad) :)