Army-themed movies are a rarity in Bollywood, and are usually a sub-genre of secularism-preaching movies. "Shaurya" (bravery) is no exception to the rule, and is rather good except for the climax which is plain silly in its execution.
Title: Shaurya
Year: 2008
Cast: Rahul Bose, Javed Jaffery, Minissha Lamba.
Sid (Rahul Bose) and Akash (Javed Jafferey) are good friends, and army lawyers. 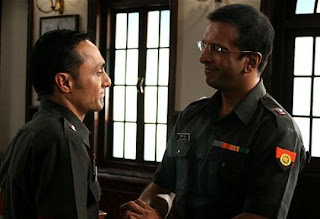 Both manage to get themselves assigned to Kashmir, where they get a court martial case to fight against each other. Sid has to defend Captain Javed who murdered his troupe leader, while Akash plays prosecutor.
Initially, Sid takes it lightly, but a visit from Javed's mom (Seema Biswas) and a reporter (Minissha) covering the story push him into digging deeper into what really happened. 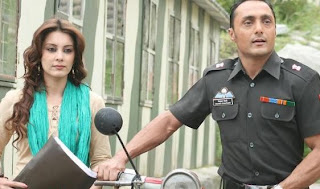 Sif finds out that Javed had gone out with his mates and troupe leader to a nearby village, where he had shot the troupe leader, a decorated captain. The entire troupe stood witness, and it appears to be an open and shut case. 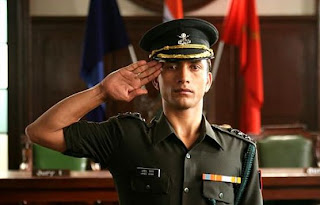 But as he learns more about the individuals involved, Sid begins to believe that all is not quite right in the scenario. Brigadier Pratap (Kay Kay Menon) who presided over the troops who went out that fateful night when the shootout happened, is very evasive from the beginning, where we find him hatching plots to hush up investigation of the case. 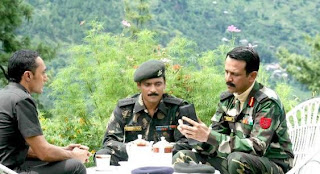 Much detection by Sid and Minissha follows, and the real culprit (of course it wasn't Javed- hello???? this is a Bolly movie, thanks very much) owns up in the end. Its pretty obvious who the villain of the piece is, so I wont say it in words, and spoil it for you. 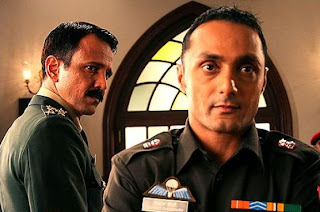 Pros:
1- The entire cast is subtle and sensitive in their portrayals, and it makes a huge difference to the end product.
2- Javed Jaffery is NOT shriek-y/annoying for once- in fact he is looking really good, mature and even handsome (!!!). Entirely believable- I'm still a bit shocked, but in a pleasant way. His acting is subtle (that word again- I kno I kno :D)
3- Kay Kay Menon is the MAN- he owns the Brigadiers role and makes himself the embodiment of a typical Indian army man- cocky, assertive, impressive, emphatic. Excellent job done sir. The man is a really good actor, and I need to see more of him.
Cons:
1- Seema Biswas is entirely wasted in her cameo as Javed's mother.
2- That final argument in court was far too long and far too preachy- killed the movie for me a bit.
Posted by Shweta Mehrotra Gahlawat at 9:03 PM

This sounds like "A few good men" and JAG! I dont usually like army movies because they tend to have very little story and tons of patriotic preachings but this one looks like its worth watching. And Javed Jafferey can look handsome and act well - sometimes! I remember a very old TV series of his with Suchitra Krishnamoorthy where he was super. Cant recall the name of the series but remember it was scripted by Haseena Moin (Pakistaani TV serial writer of Dhoop Kinare fame) and he played the romantic lead - he has just the voice for it!

Kashmkash- I think that was the name of that show- Suchitra was so adorable! heeh!
It is definitely inspired from "A few good men," but for what its worth, is treated really well. By the time it ended, I really wished there had been more Javed. And yeah, you will get preaching in the end- if they had edited that out, this would have been near perfect for me :)

Shaurya is a worth watching movie.Kay Kay Menon presents a good act.

Thanks! and keep visiting!

I like both Kay Kay and Rahul Bose...I think they are gems in today's bollywood.....thanks for the review girl...i'm heading over to your other blog now, :)