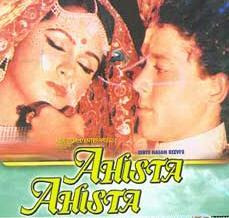 Title: Ahista Ahista
Year: 1981
Cast: Padmini Kolhapure, Kunal Kapoor, Shammi Kapoor, Nanda, Girish Karnad, Shashikala, Rehman, Soni Razdan, Leela Mishra.
Oh my goodness. Oh my goodness. This was such DRIVEL!
Usually, I love movies others dislike, and all unloved movies are received by me with open arms- everything except movies featuring violence against women, or featuring completely incapable, overtly-sacrificial women.
How was I to know that this one would be a prime example of the last type??? Esp when it boasted of such fabulous actors like Girish, Rehman and Shammi?!
[deep breath]
Enough cribbing. Onwards with the movie.
Nanda was abandoned by her husband, and now lives with Shashikala, her aunt and a prostitute, 'cos she has nowhere to go to (Nanda never seems to have anywhere to go to in any movie- sigh). 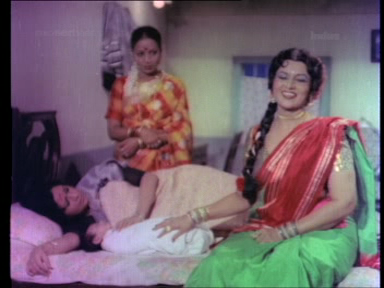 Shashikala plots with her friend Gundamma (which sounds like hindi for "female goon," but I beleive is a common Tamilian name, and is played by Kalpana Iyer- our Nikki Brown from Disco Dancer!) I love their makeup- insane! 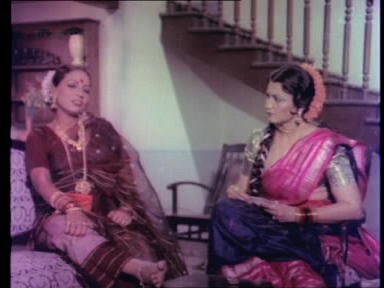 In due time, Nanda gives birth to Padmini and herself becomes a prostitute to Kader Khan (called "Dhani" here, which translates to "rich"- love their subtlety). 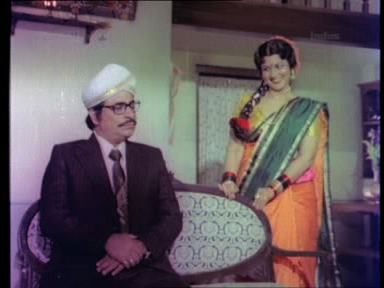 It appears to be a very accepting neighborhood, since Shammi lives next door with his family, and is supposedly a well-to-do man. Everyone knows about Nanda and Shashikala's profession, but there are no riots or BJP marches, so I am assuming everyone was pretty open-minded. 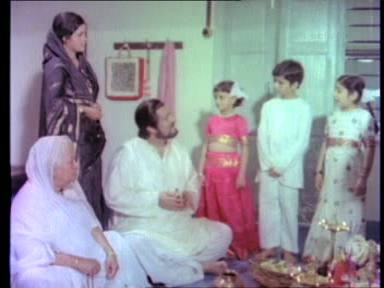 Time passes, and Padmini does good at school, which she attends with Shammi's kids, Kunal (stilted, but not entirely without his dad Shashi's charm) and Soni Razdan (Mahesh Bhatt's wife and Pooja Bhatt's step mom, and a really good actor, who is COMPLETELY wasted here- but this was only her 2nd movie, along with the lovely 36 Chowranghee Lane released earlier the same year). 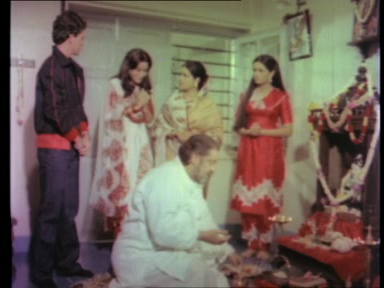 Kunal and Padmini are obviously in love- but of course no one approves. 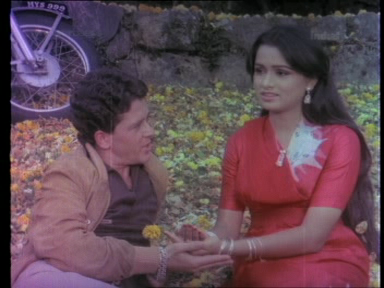 There is also a pedestrian side-plot involving Deven Verma, playing husband (as usual) to Aruna Irani who cheats on him- its terrible and leaves me cold.
One day, Shammi is visited by his old friend Girish (so young, but painted to look older, and so adorable really. He is not credited on IMDB for this movie, which must be a relief to him). 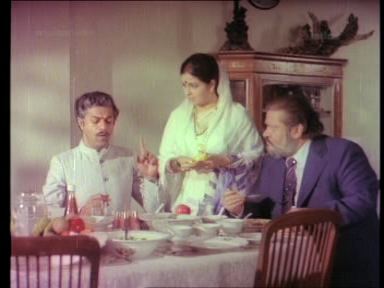 While leaving, Girish realises that Nanda lives next door- and goes to meet her, and we realise that he is Nanda's missing husband! 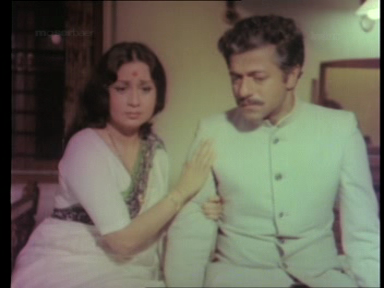 Without explanation re: what happend in the past, we are told that Girish has since remarried, and has a daughter almost as old as Padmini :S 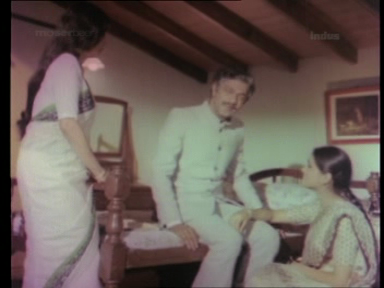 Kunal sees Padmini with her father, and jumps to the conclusion that she too has become a prostitute like her mother. 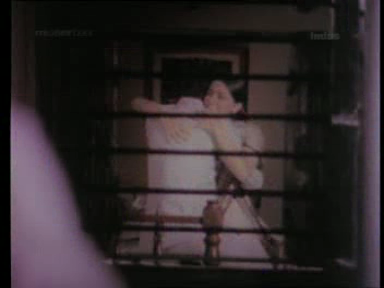 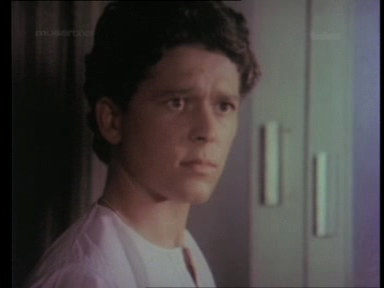 Abetting Kunal's idiocy is the fact that Girish has made Nanda and Padmini swear not to reveal anything about him to anyone :S 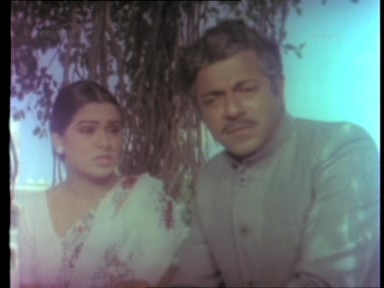 To completely vilify himself, in a completely unnecessary twist, Girish asks Padmini to walk away from Kunal, so that his other daughter may marry him. dear oh dear oh dear... 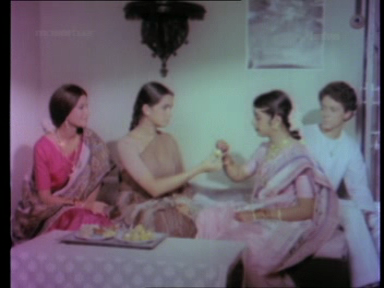 Padmini behaves in a lamb-like fashion, does not stand up for her mom or herself and does all that she is told. She tries to study, and is encouraged to do so by Rehman, her college president (wasted here, in one of his last movie roles), but has no interest in life anymore. 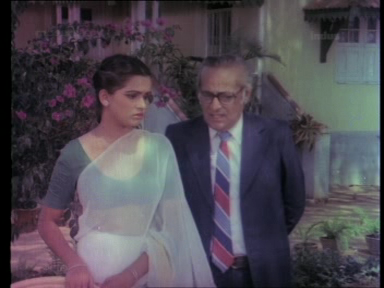 So she decides to become a prostitute too! (what brilliant logic) and receives no protest from her mom. This really makes no sense. She could go on and work, and support her mom. But no- since her boyfriend has left her, she needs to be silly. And her mom has no advice for her- wth. 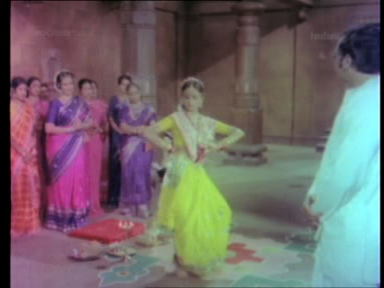 On the way back from temple, right after a ceremony announcing her joining of the prostitute-sisterhood, she stops by Shammi's house, and kills herself. As soon as she flops over, Nanda follows suit, and everyone cries. Argh.
And in conclusion: There may be a worse movie in the world. When I meet it, I shall let you know.

Girish Karnad looks so handsome but, ya, he must be really thankful for people not realising he was in this. lol

I wonder why movies like this got made at all. One can have trauma-drama with more plausible (and more interesting) stories - lazy writers and directors, you think?

And Kunal has his Dad's charm? It completely failed to show up in Vijeta, Siddhartha, and Trikaal! Plus, the guy cant act...

I hated this film too. Doesn't it have that song 'Kisiko mukammal jahaan nahin milta' in it? Real drivel.

But you know how much I love it.

Bollyviewer: Look at that smile, that bouncy hair, that sweet face- so much charm- and yes at least in a shallow, superficial way, he reminds me of Shash :D True the boy cant speak or act- but I love him the way a guy would love Celina :D

Banno: I know! if only they had shown something +ve- i just wanted to weep :)

Trupti: I remember being 5 and watching every Bombay Dyeing commercial for Karan- I was SO sure he would marry me one day- alas :) Kunal isnt quite as pretty, but he had his moments :D

Nicki: If they had shown Padmini doing SOMETHING to move on from all the troubles in her life and not caving in to the pressures from society/her dad, I'd be OK w/ it- just something to show that she cared for her mom and herself enough to move on. :)

Aw, but Kunal is so cute! He reminds me of Ron Howard back in the Happy Days, um, days. Still, this sounds awful. :-(

He was very cute- bimbettish, but cute.

Sometime in the early 70s, our family as such stopped pretty much going to the movies, unlike most of the rest of India. Father decided that he wasn't in for stupid drivel...and so we only went it was proven that it was unlikely to be rubbish- a rare thing indeed! When I was in my teens and got invited to watch movies as b'dy thing, I got see such things as Ahista Ahista or The Great Gambler. So dad was right: stupid waste of time.

Took me a long time to get back to some selective new hindi film watching: older ones I have seen all the time.

So THAT'S Girish Karnad. We have one of his plays in our syllabus this year. Can't say I'm a fan of his writing :S

Bawa: I grew up in the 80s, and share your reasons for not watching movies during that time. I think the only reason I got hevaily into Bollywood watching was because I was away from India, and found this was a way to connect. I think trashy movies make me better appreciate other movies :D Thanks for stopping by!

Arantxa: wth woman! Girish was THE man! he may still be! I love him as an actor- plus he is just cute-but cant comment on his writing :D
never read any.

i thought the movie was fine to me.. i didn't really have a problem with it.. that is, until the dad showed up and the whole misunderstanding and suicide happened.. i totally thought that it was a stupid way to end it.. and the mom, she should've at least try to encourage her daughter into not becoming a prostitute.. WTH??!!! hated how they both committed suicide at the end.. :@ so tragic.. but other than that, i didn't mind it much.. if it was a different ending, whereas, she moves on with her life and starts fresh with her mom, where neither one becomes a prostitute, then that would be fine with me.. i would totally like the movie more, but since that wasn't so, i wasn't that into it.. if i was to rate the movie, i'll give it, maybe a 3/5..

i used to love this movie when i was a kid! does anyone know where i can watch a clip of padmini's devotional dancing scene at the end of the movie?

Songs of this movie are allot better then the story...

So every body on here is trying to project their 21st century social views on to a totally different era and society. This is based on an earlier south indian movie or novel and yeah stories like this did happen in real life. the direction might be a little weak and parts of the script also but to dismiss it as sacrificial is just missing the point. "Padmini(a prostitutes daughter) moving on with her life" in 1960's south india.....gosh thats gotta be the most hillarious comment i've heard in a long time.