I had been really excited to see Dev D- my obvious love for Abhay notwithstanding, but also this was the 1st Devdas I'd see from start to finish: I had some hope that this was not going to be the misery-filled melodrama of the earlier 8 (?) Devdases. My wishes have been fulfilled! 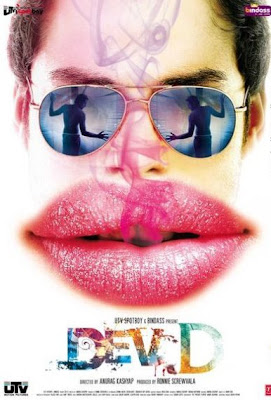 Title: Dev D
Year: 2009
Cast: Abhay Deol, Kalki Koechlin, Parakh Madan, Dibyendu Bhattacharya.
Our new Dev is obviously boorish, an idiot and a hypocrite, and we have some inkling of that as the movie opens and we see Dev and Paro as children in Punjab. While she takes the effort to cook for him, he is quick to find fault.
Dev is sent to Oxford (where else do all Bolly characters go study?) while Paro waits.
But her waiting doesn't mean our Paro is a pushover- she loves Dev, but gives him back as good as she gets. She is passionate, crazy and strong, and absolutely adorable :)
Dev is back for his brother's wedding. Other than an education, he has also acquired a Vodka and Hashish habit, but that doesn't stop us or Paro from loving him anyways. 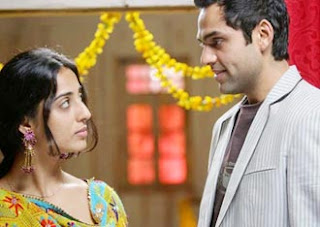 But- he believes in rumors he hears about her and instead of trusting her, accuses her of cheating on him. She has too much self respect to stick around and beg for too long, so she walks away and gets married. Wherein begins the emotional atyachaar (torture) :) 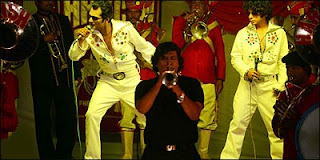 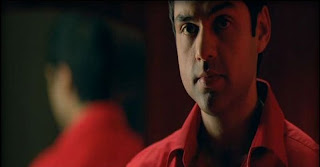 Dev begins to drift through life after Paro's wedding, and finds his way to Delhi's underbelly Mecca- Pahargunj (it is seriously a scary place at night- been there twice in my life, at the wrong hours, and revisiting isn't in my plans soon). 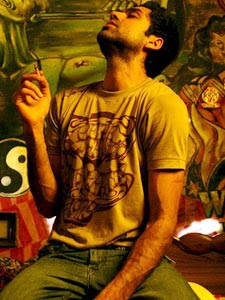 Where he meets Chanda- a name assumed by Lenny- a Indo-French-Canadian who has been kicked out of home an hearth because of an MMS scandal. Kalki plays Chanda to utter perfection- her youth, vulnerability and straightforwardness reinterpret the classic Chandramukhi to a person we can all relate to. She is doing the best that she can- she uses her body to make money so she can keep herself and go to school. She hides away her pain and walks strong, and does the right thing. I know I am waxing lyrical. 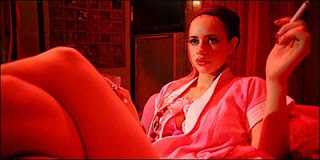 Chunni (played perfectly by Dibyendu- just wish he was there in the movie more) finds Dev wandering the streets, looking for alcohol. He brings him to a underground pub, they get drunk while they watch the Twilight Players.

Chunni brings Dev to Chanda, and I really believe that once Chanda and Dev meet, they both begin their individual healing processes. But of course things must go from bad to worse to terrible before they get better. 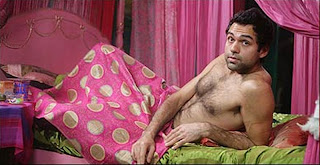 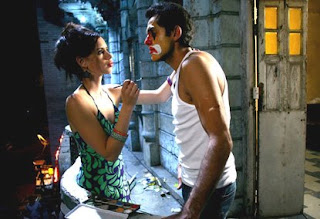 Dev eventually walks away from Chanda, unable to deal with Chanda's reality as a hooker. And has an accident, where seven people die. And then his dad dies, of illness and shock. 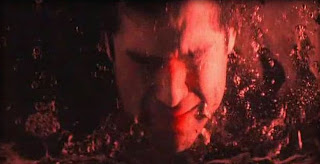 So what will Dev do? Will he heal, like Paro has? Will he die of substance abuse like so many cinematic and non-cinematic (but melodramatic) Devdases before him? Will he just see sense and get back to Chanda and try to improve his life?
You can probably guess the answers to these questions if you read this blog often enough :)
Or just see the movie already!
Final thoughts:
1- Since I haven't said this often enough (heeh) I love Abhay. He is a very natual actor, the human form of Dharam the God, and really bridges the gap between the screen and the viewer. It is easy to identify with the characters he plays, because he portrays them as people you would know, or would like to know. I've heard he is taking to production and also moved indefinitely to NYC- nahinnnnnnnnnnnnnnnnnnnnnnn.
2- Mahi, who plays Paro, reminds me of Tabu. The facial features and the body language, plus the natural, earthy appeal. I want to see more of her and hope she has a brilliant career.
3- Kalki's vulnerability is so palpable on the screen, it reaches out to you. I understand she does a lot of theatre, but for our sakes, I hope she decides to make more movies instead.
4- I've read in other reviews that this is a intellectual movie, not an emotional one- which doesn't make sense to me at all. The movie engages you on a visceral level, and yes, while I didn't blubber during the movie, I was spellbound throughout. It is a beautiful representation of a classic story- as were Omkara and Maqbool.
5- The supporting cast is brilliant- Dibyendu was very cool, and the lady who played Chanda's "madam", and the guy who played Paro's dad, Sattu, the two Elvises (!) and of course the very fluid Twilight Players.
6- The movie shouldn't really be thought of as only about Dev the man. It really is a ensemble movie, where each of the 3 primary characters are very key, as is Delhi, who is really the fourth character, and has as much of a part to play as the people themselves.
7- Way too much is being made of the sexual content in the movie- there is far less skin on show than you would see in some 60s movies. There is some violence against women, but it is integral to the story, so there is really no help for it. The main culprit is the language, which is strong, and more real than many people would probably like it to be.
8- I love the soundtrack, and was pleasantly surprised to see how well it fits in with the actual movie. Truly perfect. My favorites remain Payaliya and Nayan Tarse.
9- Anurag has paid attention to every nuance. He gets it right: the accents, the colors, the dirt (on the streets, in Dev's room), the hidden underground pubs, and the Delhi thekaas (small liquor shops) that are located on the Border (It refers essentially to the Border between Delhi and Haryana where alcohol shops abound and open late. How would I know? Well- what do you think? :D)
10-For once, Devdas isn't made to be a God-like character martyred to love- he is stripped down to his vulnerable, selfish, human self, and that is so much easier to believe in than the silk swathed lover who has spouted inanities so often before. For once, Devdas realizes his shortcomings and accepts them- he has come of age at last!
11- So flippant- but Dev favors my drink of choice: vodka and coke- with such discriminating tastes, who can resist ? :)
Conclusion: I think I just talked myself into going to watch it again this weekend.
Posted by Shweta Mehrotra Gahlawat at 3:30 PM

Thought no.9 : Gr8 observation. Even you could see the dirt !! :-) But really, Anurag has created superb atmosphere for this one. And 'that' Delhi, I am dying to visit.

Hummm..I am going for re-watch tonight.

Dev D sounds so cool. I've read many many positive reviews about it but sadly it hasn't released in the UK :( Have to wait for the DVD now. I'm hating it :(((

Love the twists on the Devdas. Definitely will watch this since not a fan of Devdas.

Darshit: The dirt adds character! (that's my standard excuse for not wanting to dust and mop :D). Eh- cola is cola :) this movie is a landmark.

Bhargav: seriously??? they HAVE to release in the UK- with such a huge Bolly following, y are they missing out??? i do sympathize :)

Nicki: I am digging the chest, the smile, the dimple- rofl. Yup, this movie definitely wked very well for me as a Devdas-nonfan :D

I can't wait to see this! Just picked up my copy of Oye Lucky Oye today, so I'll hopefully get to sit down and watch soon--haven't seen an Abhay film before!

It sounds like this was a fresh adaptation of an old story--that worked. I'm really excited for the DVD. Thanks for all the Abhay coverage, Shweta:)!

Nida: Oye Lucky was SO great! I hope you enjoy it, though I hesitate to recommend it to anybody who hasnt lived in Delhi- it has a lot of cultural references which tend to be lost in translation. Regardless, I love Abhay in all his movies- I think perhaps one you would enjoy might be Ahista Ahista.
Cant stop "Abhay Coverage"- the fangirl in me has gone nuts :D

Here is my take on it. I know it took me a long time to write this review, primarily because I wanted to watch Dev D twice.

Here's the link, and please let me know your thoughts on it.