I am beginning to believe that I am a little bit obsessed with Dev D.
Certainly haven't ever felt the inclination to write about characters from a movie before.
Oh dear.
Dev's character, as portrayed by Abhay is hardly the Bollywood hero we are used to. He could be Any Young Man from Punjab/Delhi, with the money to do as he pleases. Perhaps because of the wealth, there is a sense of entitlement that is obvious from the minute the character appears on screen. What is harder to understand, is the attraction beautiful young women feel for him, and why they seem to fall head over heels the minute they clap their eyes on the man. What attracts his lovers? 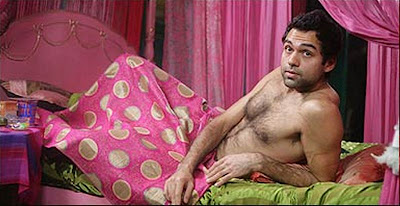 Paro (Mahi Gill) really has known him only via online chat/phone, but when we see the couple meet as adults, we see an instant attraction between the two. What Dev feels is debatable, but Paro's love is apparent- but the viewer isn't privy to the reason for this love. If we don't regard this as a error in character development, then perhaps we can attribute it to the complexity of human nature: people love who they love. Her love for Dev transforms- we see that when she meets him again, later in the movie- she treats him as she would treat a "special" child- she at least learns her lesson and moves on. What is Paro upto after we part ways from her? Will she continue to stay home and take care of her kids and family? Will she be a social worker/politician- she could be good at that. Will she go to work? I want to know.
Dev's next conquest is Rasika (Parakh Madan) who seems to have an instant attraction towards him, to the extent that minutes later we see them in passionate embrace. What prompts this attraction? He is cute, and educated, but is that impetus enough for Rasika who is an educated young woman from Delhi, and has a lot more to choose from that Paro did? Since her character is really in place to move the story along, we are not informed about her life choices, but I would like to know. I doubt she ends up in Oxford as she claims earlier in the movie- maybe she is ambitious and joins her brother's business. Maybe she will open a tiny boutique in Delhi, like thousands of young women do. Maybe she too will turn homemaker.
Later, the blond who sells him drugs with her partner is quick to begin taking her clothes off in his room (WHY do all Bollywood firang females appear so ready to drop clothes? WHAT is the point of perpetrating the image of the loose-foreign-female?). She would too, but Dev stops her and continues to brood, do drugs and wallow in misery. I would like to know what this unnamed woman chooses to do in her life- she is really mellow, and I like to imagine that she eventually moves to Pondicherry, and hangs out doing yoga and hashish. She could also move to Southern California and be a yoga mom, or how about a complete change- move to the Southern United States (assuming she is American, though she really looks from Central/Easter Europe), and drink sweet tea in the warm evenings, Delhi just a distant memory?
SPOILER ALERT: DO NOT READ FURTHER IF YOU HAVEN'T SEEN THE MOVIE

Lastly, we come to Chanda/Lenny (Kalki Koechlin)- her embracing Dev, literally and figuratively is the most puzzling of all. She is a prostitute, but isn't pressured to do so in the regular Bollywood way, and appears to be in control of her life. She goes to school, and is poised to move on to better things. And yet, the first time Dev leaves her brothel, she calls out that he mustn't come back again, or she would fall in love. But why would she fall in love if he comes back (he does, and she does)- he has been nothing but rude to her in their first meeting, and yet she is attracted- why? Perhaps we should assume that her character has suffered so much betrayal in love (boyfriend, father, mother, family) that she just needs something to hold on to, while she continues to move forward with her life. What would she do if it werent for Dev- move out of the brothel when she gets a degree? Become a doctor? a school teacher? a bartender? a pilot?
I'd like to imagine what happens after the credits roll: would Dev stay with Chanda? or would he drift away again? It is certainly easy to fall back into old ways that we are used to- old habits are hard to forget forever. Would he not be attracted towards self pity in a weak moment, and fall into the pit of Paro's memories? I would hope that he continues to make bail, continues to move forward, live with Chanda, and who knows- find a job? I cant imagine Dev joining the family business in Chandigarh- but it could happen- Dev the sugar mill owner, living the suburban life with wife (Chanda), kids and a dog :)
I think about this movie entirely too much.
Posted by Shweta Mehrotra Gahlawat at 4:18 PM

OMG !!
Seems like you are drowned over the movie. Superb analysis. How about a complete story about sequel? Really, I also wanna know what happened then...

The starting portion, where Dev suddenly gets ready to come back to India, is indeed debatable. It was unconvincing for me but as far as movie went further, I was convinced.

And hey, put a spoiler alert before last para :-)

Darshit: Yep I love the movie in scary way. And your are absolutely right- added the spolier alert- thanks!

Actually obsessing over an Abhay movie is a good thing. :)