Pardon me while I work on controlling my laughter.

This has to be one of the most unintentionally hilarious movies of all time :) 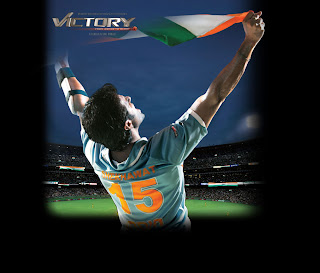 Baweja is a cricket wunderkind in Jaisalmer, Rajasthan. He argues his way into a Ranji match (!), then is ushered into the Indian national team, loses himself in the hype and money of being a cricket star (!), loses all due to misguidance by his manager (Gulshan, of course), and then makes a huge comeback.

It’s not a bad story, but here it is again, with places where it misses the point in scripting, editing, and most of all, acting:

And in Conclusion: It's pathetic. That said, who knows- in 20 years, it may be a camp classic- but I have my doubts.

I couldn't have agreed with you more. But I thought Harman made some improvements since Love Story 2050. I mean atleast he looked sincere in his approach. Gowariker's What's Your Raashee will be an interesting watch though, after two super duds.

I can't believe you seriously saw this film. :-)

Bhargav: If only sincerity translated to good acting- but that may yet happen- greater wonders have happened :)

Banno: I am honestly v brave- which can sometimes translate into foolhardy as well :D

Bollyfan: but Harman was a WUNDERKIND- his blood probably coagulates faster too! :D the real cricketers who spend any real screen time are Bhajji and Brett- I guess they couldn't afford to pay the others for more screen time :)

Gosh! The things you do for Bolly-love!!! I'm glad someone saw it - so the rest of us dont need to. Guess Harman + Gowarikar might be better, but after Jodha Akbar I'm not big on Gowarikar either!

Hmmm, never heard of this movie...and not sure if I want to watch, lol

Bollyviewer: I didnt expect it to be steller either, but overall it just felt like a big lost opportunity for all the folks involved in the movie. It COULD have been much better than it was, and the plot was old but workable- ah well.

Nicki: Trust me, I am pretty sure u wouldnt wanna watch :D