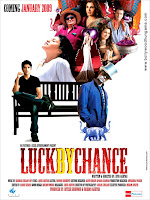 Title: Luck By Chance
Year: 2009
Cast: Farhan Akhtar, Konkana Sen Sharma, Hritik Roshan, DImple Kapadia, Alyy Khan, Juhi Chawla, Isha Sharvani, ......... I give up, the list is too long.
Farhan plays a struggling actor in Bombay, with a little circle of friends, all trying to get a break into the movie industry. He meets Konkana, who has been struggling for a while in the industry, and is being taken advantage of by Alyy Khan, a producer/director. Farhan gets a lucky break, and he amplifyies it by using his cunning and his talent to become what every struggler wants: a star. But in this rise his budding relationship with Konkana crushes, who walks away to become a soap star.

But that's not all to the movie, whose highlight is the trillion cameos by Bollywood actors every few minutes. Ironies abound in this movie, and some which particularly struck us are:
1- The protagonist, Farhan, talks about working hard to pursue your dreams and realizing them by your own drive and will. Which is fine, and which we have seen in Bollywood from Prithviraj Kapoor to Pran to Helen to Akshay Kumar to Ranvir Shorey. But- when Farhan Akhtar says so, we cant help but wonder if it weren't for his roots in Bollywood via his family, if his rise in Bollywood would have been quite so meteoric, despite his immense talent. Similarly, we highly doubt this movie could have been made by Zoya if she was anyone but Zoya Akhtar, talent notwithstanding- how else would she be able to score all those star cameos? It is highly ironic when the leads, both Bolly family scions, talk about their struggles in the movie, and was really distracting to me.
2- Isha does that weird-upside-down-dance-thing of her that she did as a village girl in the horrible Kisna (2005)- only here it finally makes sense she is acting a dream sequence in a circus. We wonder if Zoya laughed at this one.
Highlights:
1- Alyy Khan is so talented and so beautiful: We have had a crush on him since we were 13, and don't see why he doesn't get/do more work.
2- We have said this before, and will say it again: we love Rishi much much more now that he is older- the middle aged Rishi (80s-90s) doesn't compare with the 70s and the 2000s Rishi. He is a complete delight, and...
3- ... even more delightful when paired with Dimple. If you haven't seen their Pyaar Mein Twist (2005), do try.
4- Lovely cinematography- we'd like to paint the circus song w/ Isha and Hritik.
5- Our favorite cameo was Aamir's, for the shallow reason that he looked very very handsome, and spoke very very well- such a empty dialogue, but the man sells it! Completely worshippable.
6- Akshay Khanna's cameo was SO cool- his hemming and hawing, and then the clear "no" to the movie on offer was just what we hear of him in the tabloids :D
7- Are Rishi and Juhi supposed to represent Boney Kapoor and Sridevi? It certainly appears so- an aging producer and his gorgeous wife ... Juhi is fabulous: another actor who should get more work!

Conclusion: Definitely one of the better movies that will come out this year. We are very eager to see what Zoya and Farhan choose to do next.
Posted by Shweta Mehrotra Gahlawat at 3:44 PM

I love Alyy Khan, too (just cant recall which TV serial it was that started it all!) and yay for Pyar Mein Twist - Rishi-Dimple finally did what they couldnt in Bobby!!!

LBC is ironic in that a movie that makes fun of star-kids and celebrates the coming of an "outsider" is chock-full of star-kids themselves. Atleast Konkona doesnt whine about how being a star kid brings so many expectations and how life is more difficult because of it! That said, its such a delightful movie. Everybody acts so well and fit their characters so perfectly that it felt real! Can wait for what Zoya comes up with next.

Shweta, Your point about Zoya and Farhan being able to make this film, precisely because they are who they are was very valid. It's been playing on my mind too, but I did not articulate it, because it would seem so much like 'sour grapes'. But you put it very aptly, that it was distracting.

That said, yes, the film really worked because of its cameos. Of course, Rishi, Juhi, Aly, Sheeba, but also the choreographer friend, the secretary, the AD friend, the theatre actor. Really well handled.

Oh...now I got it. I was wondering Rishi is playing Ghai. But unsure about Juhi. They both are perfect as Sri-Boney (and Devar Sanjay Kapoor !! Wah )

Wow, so far heard positive things only about this movie. Can't wait to watch it.

Hmmm...sounds interesting, and for some reason, I'm getting a feeling of deja vu, like the plot sounds similar to another movie I may or may not have seen, but anyway, I might check it out if it's ever listed on Nehaflix for $7 or less.

Bollyviewer: Alyy is v v cute- ur right, it WAS a TV show- now i have a need to go hunt it up :D

Banno: I'd think of the whole "star kids" thing every few minutes! :D And i agree everyone fit perfectly- Hritik rather amazed me!

Darshit: And I dont think I'll ever forget that 1 line by Sanjay: "Main bhi kabhi actor tha" (I too was an actor once)- so so ironic- I cant imagine how they got him to say it :)

Nicki: It's good- at the very least, its fun to watch ur fav actors flit on and off the screen :D

Lapetitediva: haha- do tell me about which movie, if u happen to remember it sometime- I'd really like to track that!

TheBollywoodfan: I think they will be- try Naz8 in norwalk (i think)- its a bad theater, but they play a lot of stuff.

The wait to see this movie might kill me. If I don't post for a while you might want to make sure I'm still breathing. ;-) I totally agree about Juhi--she's adorable! Why don't people just write more roles with her in mind? C'mon, Hindi scriptwriters!