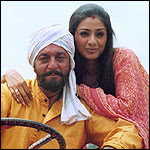 "Umr guzregi kaise tere bin"- I can't get this song from the movie out of my head!

I decided to watch the movie primarily because (1) the hubby had gotten hold of it, (2) it is relatively unheard of, making me hope it would meet the B-movie criteria I always look for. So it came as a pleasant surprise that the movie is actually pretty good. To me, it seems to pick up almost where Maachis (1996, See: http://www.imdb.com/title/tt0116950/; Useless information: Did you know that the legendary Gulzar's name is Sampooran Singh Gulzar?) left off. For those not in the know, Maachis was about the 90's terrorism of the Indian state of Punjab; of the persecution of Sikhs during the period- a really amazing movie which i won't go into depth here). Usingthe principal two cast members from the older movie (Tabu and Chandrachur), Sarhad..talks about Punjab post the 90's terrorism phase.

The movie opens to Pammi (Tabu) eagerly awaiting the return of her husband, Major Ranjit Singh (Sanjay). The Major was lost in terrorist clashes at the Indo-Pak border, and has been presumed dead, since his name is in no POW list. But since he isn't on any dead-man list either, Pammi as well as Simran (Mahima, playing the Major's sister) do not give up home, unlike the rest of their village, including the Major's uncle, the family patriarch. 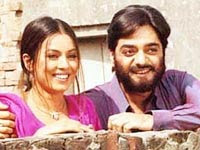 And one day he does come home, but under sever trauma, unable to recognize anyone. While Pammi works hard to assist the Major remember his past, we also see that the preparations of Simran's wedding to Ravi (Chandrachur) are underway.

Alongside this we learn that the perpetrator of the Major's trauma was the terrorist known as Bakhtavar (Rahul Dev- a model turned actor who can actually act surprisingly well), whose mission appears to be Indo-Pak discord. Both the Indian and Pakistani police/army are after him, and are being assisted in this by his own father (the "good" Muslim), who is murdered towards the end of the movie in a scene exhibiting Bakhtayar's evil nature revelling in patricide. 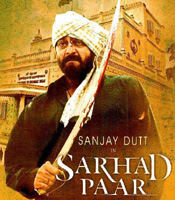 The Major remembers his past and rejoins the army, with the sole aim of capturing Bakhtavar, which he is successful in doing. Along the way, he gets Simran married to Ravi, whom we learn is secretly in cahoots with Bakhtavar (dramatically opposed to Chandrachur's idealist, martyred terrorist in Maachis) for monetary gain. In the final showdown, the Major recaptures a fleeing Bakhtavar, but is waylaid by Ravi, who is then shot down by Simran (she embodies the hindi-movie fabled patriot giving up the pleasures of self for the country), clearing the way for the Major to avenge himself upon Bakhtavar. Whew!

My only quibble with the movie was the somewhat shoddy editing, which downplays some pretty fine acting by Tabu and Mahima (finally she gets out of the B-movie scene to do a decent act- for her sake I wish the movie had done well). Some scenes appear to spring at us from nowhere at all- the closing scene is particularily adrupt, and no closure is bought to Simran (what route does she take once her new husband is dead- no one seems to care, but I want to know!). Sunjay delivers, but looks older than his age (he is 48, but here looks to be in his 50s). One may assume his trauma contributed to his premature aging in the movie, as did perhaps the notorious TADA court cases in real life. While the patriotic dialogues get cheesy in parts, the conviction displayed by the entire cast is the redeeming factor of the movie.

I was rather sorry to read reviews of Sarhard.., most of which pronounced the movie as dated since the events under discussion were awhile ago and India-Pakistan are on the road to friendship (really? I do want to see that happen, but the friendship between the two nations remains uneasy at best). I do not see why that should date the movie in anyway- our past contributes to our present and future, and whether or not the movie's portrayal is historically correct (it isn't), the movie should be recognized for at least the emotion it envokes, as well as for the (mostly) brilliant acting of its actors.
Posted by Shweta Mehrotra Gahlawat at 11:02 PM