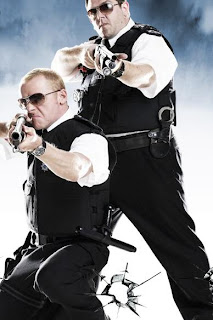 I did both, and therefore I HAD to see this one. Its the same team which made the earlier movie, and there is camp-iness galore all around. "Shaun..." was a spoof of the horror-zombie genre, while Hot Fuzz is essentially a spoof of the action-police-movie genre, and it appears that everyone was really having a lot of fun making it.

PC Nicholas Angel (Simon Pegg) is so good, he makes the rest of the London police force look bad (look out for: a cameo by Martin Freeman [The Hitchhiker's Guide to The Galaxy 2005]- so the rest of the department, including the chief inspector basically pull

off a successful plot against him, getting him a promotion to Sergeant while being transferred to the sleepy village of Sanford- where there is zero crime.

Nic arrives in Sanford to find that his partner is the child-like but enthusiastic PC Danny Butterman (Nick Frost). The son of amiable Police Chief Frank Butterman (Jim Broadbent), 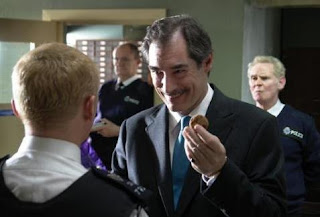 Danny becomes an immediate devotee of Nic's obvious policing skills. He derides himself of not living up to his action-movie idols from movies like "Point Break" and "Bad Boys." It is mutual catharsis as Nic disillusions Danny of the fantasy police-type and attempts to bring disiplice in Danny and the local police force. On the other hand, Danny helps Nic loosen up.

While this friendship develops, Nic begins to suspect some thing's afoot in Sanford. A series of gory accidents rock the village, and he suspects Simon Skinner, (Timothy Dalton) the local 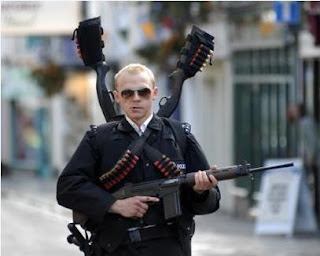 supermarket manager. Frank Butterman is quick to dismiss this as fantastic and a result of Nic's strenuous work in London. Nic's frustration grows, as do the crime scenes in Sanford.

All hell breaks loose as Nic makes the gruesome discovery that the majority of the village- the primary business owners, Frank, Simon, the local Rector and prominent farmers are a cult-type society. The society's sole objective is to have Sanford win the "Model Village" award year after year, and they have been eliminating all the folks whom they consider are contrary to that image (yes, really!) 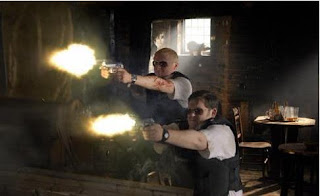 Danny helps Nic get away, but half-way to London, Nic has an epiphany in a convenience store (yes! really!) and doubles back. He becomes a Rambo-Trinity-like one-man-army, and enlists the help of Danny, the 2 local police detectives and 2 other PCs to clean up Sanford.

Mayhem ensues, and after lots of shootings, car chases and general excitement during which NOBODY DIES(!!!!)- peace is restored to Sanford. Nic decides to stay back in the village rather than his go back to the big city.

This is a great movie- you have to take it in the spirit it was made- campy and pure, nonsensical fun. Nic and Danny have great chemistry and their friendship is the basis of this movie, as was "Shaun.."- You gotta see it!

PS: Looks out for a speedy cameo (uncredited) by Peter Jackson- as the local Santa :)
Posted by Shweta Mehrotra Gahlawat at 1:18 PM