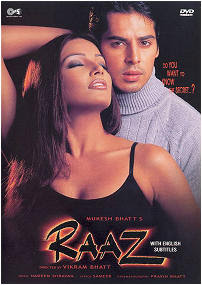 Title: Raaz
Year: 2002
Cast: Dino Morea, Bipasha Basu, Ashutosh Rana
Aditya (Dino) and Sanjana (Bipasha) are trying to give one last chance to their crumbling marriage. They go back to their 2nd home in Ooty (A holiday retreat in Southern India), where they had spent their honeymoon a few years ago. Once there, Sanjana senses a spirit in the house, while Aditya acts defensive and withdrawn in turns, discouraging Sanjana's suspicions about the house.
With the local voodoo professor (that's what he sounds like) Agni's (Ashutosh Rana) help, Sanajana figures out the truth: Turns out, Aditya had visited Ooty without Sanjana when their marriage was going through a particularly rough patch. Once there, he had met Malini, a somewhat psychopathic woman who he had offered shelter one stormy night (when she was actually escaping the mental asylum she was admitted at!). Thehy had a torrid affair, living together in the smae house withSanjana tucked away in another city, oblivious to her husband's escapades. Malini shot herself when Aditya got bored of her and wanted to go back to his wife. To avoid scandal, he buried her in the woods behind the house (ye, really!) with the help of his housekeeper. 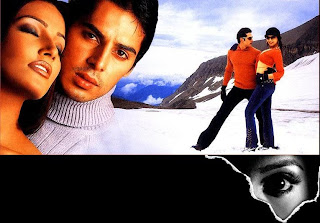 Once this secret is out, Aditya tries to win back his wife who is obviously angry with him. On Agni's advice, she realises all this is only a ploy by Malini's ghost to separate her from Aditya, and goes back to him (what?? huh?). The couple then tries to leave the city (mmm, is no one thinking about reporting the poor woman's dead body to the police? I mean, her family may want to perform her last rites- heck- no respect for the dead here. No one even wants to have Aditya booked for hiding a body...oh well.) Malini's ghost refuses to let them leave, and injures Aditya severely.

Agni decides that the only way to destroy the spirit is to burn her long-buried body (go figure). He, Sanjana and a friend head out to the woods to dig and burn the body, where they also discover the dead body of the housekeeper hanging from the tree. Pretty soon, Agni is dead by Malaini's hands (figuratively- if a ghost has hands), his body is occupied by Malini, whereupon a lot of running and screeching later, Sanajana successfully destroys the ghost. She rushes back to Aditya, who has been operated upon in the interim in the local hospital to fix his injuries, and finds that he has survived his ordeal as well. It is implied that her destruction of the ghost has contributed to the success of his operation. The credits roll upon a reconciled Sanjana and Aditya (who has recuperated well enough, thank you), getting back to their life together, minus all the squabbling.

Raaz (Secret) is loosely based on Harrison Ford's What Lies Beneath (2000), and has been made by Mahesh Bhatt, a director infamous for his liftoffs (sometimes successful, sometimes not) of Hollywood movies. This one works well, with not very blatant copying. Bipasha screeches irritatingly (maddening) and opens her eyes very wide (annoying) most of the time, both of which habits she did let go of in subsequent films (whew). Dino is plastic;he is just a pretty boy who really should have just stuck to modelling. Ashutosh Rana delivers, but his performance is reminiscent of every other performance he has ever done. What is really weird is the utter disregard to Dino's crime of suppressing a body- the director seems to have utterly ignored this little plot point. The movie should be seen only because there are so few and far-between of the horror genre in Indian cinema- otherwise avoid.
Posted by Shweta Mehrotra Gahlawat at 7:18 PM