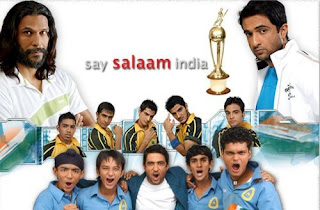 Title: Say Salaam India
Year: 2007
Cast: Sanjay Suri, Milind Soman, Sandhya Mridul, Sachin Khedkar, Manoj Pahwa, Shraddha Nigam
Lets begin by saying that I love low budget movies. They can be like the movies Hrishikesh Mukherjee made in the 70s with Amol Palekar- beautiful and heart-warming, about everyman. They can be campy and just badly made, with the cast earnestly getting in on the fun, fearless and with verve. However, they can also just go horribly, horribly wrong- with good actors misused and story elements butchered on the editors table.
I think Say Salaam India (Greet India/Greet me India- depends how you read the title). Actually I am not sure how the title works with the movie. Are our teen heroes and their coach (Sanjuy Suri) supposed to be hailed greeted as victorious by India? Or are they, having found success, supposed to greet India as its new generation of heroes? Its never explained.
Before we begin, we should also keep in mind that while India is a country obsessed with Cricket, precious few movies have been made on the subject, and then with mixed results (Awwal Number- a dismal flop that lasted a few days in the marquee; Lagaan- an Oscar finalist). 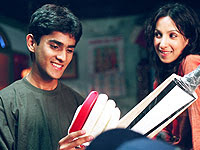 Say Salaam India showcases some pretty great talent: Sunjay, Sandhya and Shraddha are really nuanced actors. However, Sunjay goes overboard with the cricket quotation dialogues (gets tedious after awhile to hear exactly what different players of the game said in one game or other anything from 2 to 20 years ago). He appears so like a thesaurus that he loses out on the emoting. I mean this guy has a young spastic son. His wife works in some college, while he minds the kid at home, or takes him out to town when he runs errands- cant he try to get a real job, make money, move to a bigger town where Spastic schools exist and maybe let his kid get an education? That bugged me a whole lot in the movie, cos we never hear once of his kid having anything to do with the insides of a school, whereas he himself is a cricket coach in a school. Aagh.

Sandhya Mridul plays Sunjay's wife, and is great whenever we see her on screen- she just mysteriously disappears about one hour into the movie- and then we only see the father son duo. Shraddha Nigam plays elder sister to Viru, the team captain from the Tejpur team- has a few great scenes, which deal with the pressures young women face to get married in India and stand a poor chance of making a successful marriage due to lack of dowry. But she too disappears about 1/3rd into the movie, having bought her brother the requisite cricket gear. It would have been great to have both ladies at least come to the final game in the end, to bring some level of required closure to both characters. They did a great job, and the editor actually provides a disservice to the movie by not bringing their roles to a logical conclusion.

The story in a nutshell: 4 boys: Viru, Mahi, Shakeel and Guri from the Tejpur Government School (Government Schools are, like the name suggests, run by the government and run on extremely skimpy resources in any part of India) are rejected by some cricket team tryouts in their city. Their own school does not have a team- they consider themselves too poor. Hari (Sunjay Suri), a maverick coach, is thrown out by a posh school in town, 'cos his team is too bratty to listen to their coach when he commands discipline. Sunjay goes and offers to coach the Tejpur kids for free, also providing free gear (he makes no money, yet gets corporate sponsors- mmm- how does this work, folks?). The movie culminates with the Tejpur team facing off the posh school's bratty team, which is now lead by a hirsute Harry (hairy Harry- hee- played by Milind Soman) who is manipulative and a cheat. Of course the poor, downtrodden team from Tejpur wins.
The movie isn't very bad- but it could be much better. I just feel sorry for all the talent that the director had to work with, can couldn't optimise to the fullest. And Milind Soman needs a shave- he has begun to look the old Maharashtrian man that he is :D
Posted by Shweta Mehrotra Gahlawat at 11:39 AM

Sanjay Suri is such a good actor, i loved his Pinjar, Daman, and Filhaal. I haven't watched this one yet....