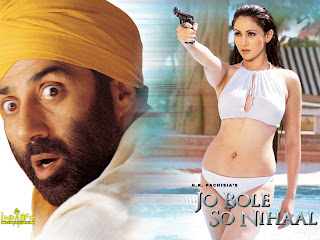 I saw "The Namesake" tonight- and cried buckets- but that review can wait for tomorrow. Tonight we have to run through Jo Bole So Nihal (He who speaks the Lord's name is satisfied). The words themselves are an integral part of the very beautiful Sikh religion. Sikhism is a popular religion in India, but the Sikh that is most colorful and exuberant of all is found in the Northern state of Punjab. That is where our story starts. 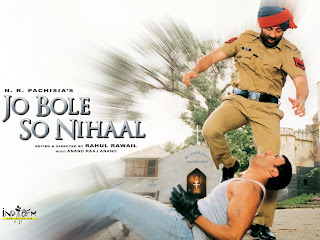 Nihal Singh (Sunny Deol) lives in Punjab with his family: dad (village headman), mom and sister Satnam. While out patrolling, One day Nihal comes across a suspicious-looking man called Romeo (Kamaal Khan). Romeo flees Nihal, who is later told that that Romeo is a terrorist. He is initially suspected of abetting terrorists and suspended.

Until this point, the movie is somewhat believable; fantastic but acceptable. The weirdness sets in from here on. Romeo's next attack is in the US, and the US police finds no better way to strengthen their defence than by inviting Nihal to 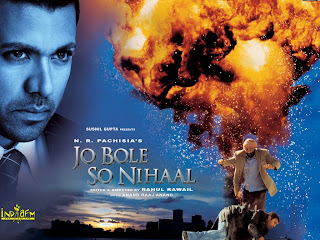 the US to identify and find Romeo. Now even a baby can recognize the ridiculousness of the situation- but whatever.

So Nihal arrives in NY, generally behaves like a buffoon, and screams like a maniac. He appears to see Romeo on the street simply by accident (what? a terrorist is walking the streets, and it takes Nihal walking down the street, not the work of the combined police forces and the national gaurd to find him?!!).

Lots of confusion follows, during which Nhal acquires an Indo-American girlfriend, gets his 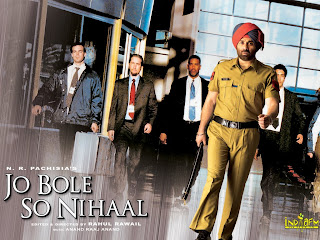 This could have been an OK movie- what makes it bad is the implausibility of the situations, the constant shrieking and screaming by Sunny Deol, and the terrible portrayal of Sikhs. Sikhs are smart, hardworking people- why must they be the butt of so many jokes, to the extent of being caricatured by Sunny in this deplorable farce? It was good to see Kamaal Khan though- if for no other reason than to reminisce his singing days of "O o jaane jana." A very exhausting experience overall- never see it.
Posted by Shweta Mehrotra Gahlawat at 10:54 PM