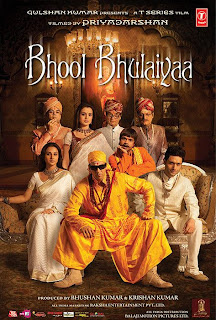 I understand “Bhool..” is a remake of super-hit Malayalam and Tamil movies, fairly dated. However, the Hindi version doesn’t appear dated at all; in fact, this is the first time I have begun to somewhat appreciate Akshay Kumar’s acting (or antics, if you will). 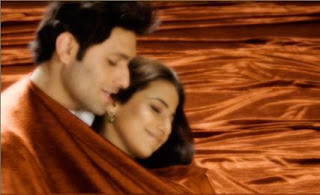 Siddharth (Shiney Ahuja) and his wife Avni (Vidya) are visiting their ancestral palace (Siddharth is the scion of an ex-king) in Rajasthan. One of Siddharth’s ancestor’s apparently murdered a dancer and her lover in the palace, and now the dancer’s ghost allegedly haunts the palace, having vowed t kill all the male heirs of the family. It has been bound in a room on the 3rd floor by a witch-doctor, but Avni opens the door, and now the entire family is in jeopardy- or so the entire clan, except Siddharth and Avni believe. 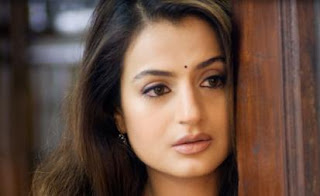 Siddharth thinks one of his adopted cousins, Amisha, who was betrothed to him, is attacking Avni out of jealousy- besides, no one has actually seen the ghost. He invites a psychiatrist friend, Aditya (Akshay Kumar) to attend to Amisha, so that she would stop these attacks.

For once, I am NOT going to discuss how the mystery is resolved and the climax met. The movie manages to be entertaining and fun upto the point where the identity of the ghost is discovered. After that it seems to go downhill- maybe there was no way out of that; after all the ghost MUST be gotten rid of- but it just gets reeeeally boring towards the end.

Pros: Sheer entertainment value. No one steals the show, but there is a united effort to produce this fairly likable product.
Cons: Can someone please give Rajpal Yadav a decent role??? He CAN act- but lately I have seen nothing good from him at all!
Posted by Shweta Mehrotra Gahlawat at 9:52 PM