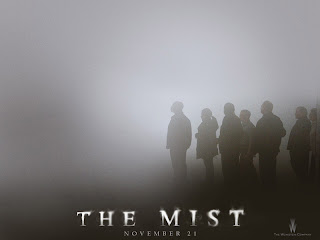 Title: The Mist
Year: 2007
Cast: Thomas Jane, Marcia Gay Harden, Toby Jones, Nathan Gamble
It took me a while to think this one out.
I am not a pessimist by any stretch of the imagination, and avoid depressing movies as a general rule- I am one of the few movie-lovers of my generation who walked out of The Titanic (and never saw it in complete format- too much tragedy) after the 1st 15 minutes, simple to avoid songs and tears.
And much as I loved "The Mist" as a novella, the movie turned out to be more disturbing than I would have earlier imagined.
Let us go through the Plot first:
David Drayton (Thomas Jane) is a movie-poster artist, who has done substantially well for himself, and lives on the shore of a natural lake in Maine with his wife and son Billy (Nathan Gamble). On the other side of the lake is a mountain and army base housing the so-called"Arrowhead Project." 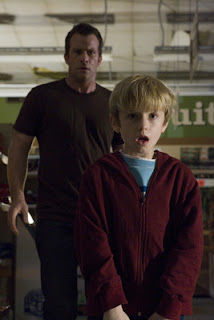 One night, there is a huge storm, and David wakes up to find much of his and his neighbor's (Norton) property wrecked. Normally not on good terms, the storm brings them together and they drive down with David's son to pick up supplies at the local grocery store.
David's wife is alone at home, with a thick mist drawing closer over the lake....he will never see her alive again.................
Things are chaotic in town as well, and David and Billy find themselves stranded in the grocery store with other shoppers when the mist envelops the town completely. There is "something" in the mist, that brings out the monsters outside the store and inside the stranded towns-people's hearts. 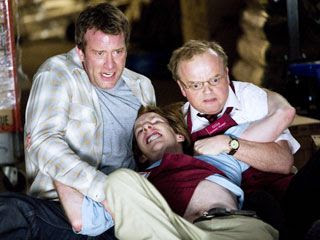 The other stranded folks' begin to evolve: A Bible-thumper Mrs Carmody (Marcia Harden) who is normally ridiculed about-town becomes the reigning evangelist of the store, while mild -mannered Ollie Weeks, the painfully shy assistant-store-manager becomes a leader of the frightened, weaker folks in the store, with a sense of command and direction. Mass-hysteria and human sacrifice strike fear inside the store, while monstrous creatures (results of the Arrowhead project) stalk the streets. 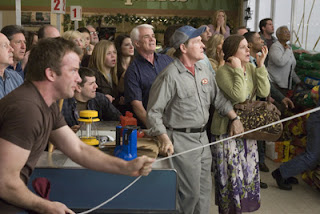 Eventually, David leads his son and a few others successfully out of the store- and they drive off ....... until the gas tank runs out. He then shoots his son and the rest to save them a worse death in the hands of the monstrous creatures- but is plunged into black despair when moments later, the army arrives to save the day. His sacrifice, his bravado have all amounted to nothing- he has lost all that he had. 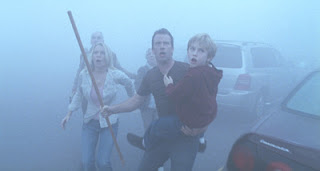 The end of the movie is extremely unpleasant, and leaves one feeling more than a little cheated. I watched it with my cousins, sister and husband, and we were all properly scared and enthusiastic till the very end, which left us all somewhat shocked. It took me the past 4 days to actually come to terms with it and write about it- the death of a child is just very very disturbing to me.
Pros: For once, a director has managed to properly reflect the psychological terror and angst of Stephen King's writing- some would argue a little too well. Thomas Jane makes for great eye-candy though..:)
Cons: It seems a little premature for David to shoot his fellow travellers and son. So fine: the gas ran out- but wouldnt one rationally wait until SOMETHING attacked them before killing everyone????- after all David couldnt have been eager to start randomly shooting- or would he?
Posted by Shweta Mehrotra Gahlawat at 1:40 AM