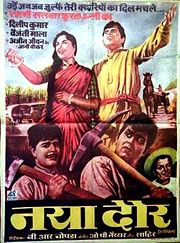 What is the difference in the quality or content of a movie, whether it is in full color or black and white? Color or schema in a movie may suggest the tone of a movie (remember Schindler's List), but personally, I do not believe it makes a movie any greater or lesser.

Which is why I do not understand the re-release of colored versions of Mughal-e-Azam and Naya Daur. The movies themselves have stood the test of time, and are infinitely more memorable than 80% of the cinematic product delivered every day. Perhaps the addition of color is to create new memories of these movies in the minds of a new generation.....

But let us briefly discuss the plot:
Shankar (Dilip Kumar) lives in a remote Indian village with his mother (Leela Chitnis) and sister Manju (Chand Usmani). While Shankar drives a horse-carriage for a living, the primary job available for the average man in that village is at the lumber factory belonging to kind-hearted businessman Maganlal (Nazir Hussain). Shankar's best friend Krishna (Ajit) works for Maganlal as a lumber-man. 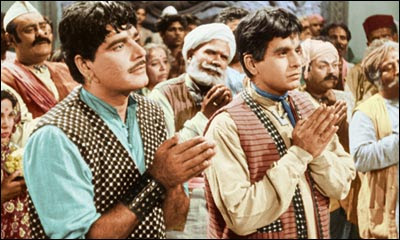 One day Maganlal takes off to teerath (Hindu religious pilgrimage), leaving behind his foreign-educated son, Kundan (Jeevan) in charge of the factory and property. 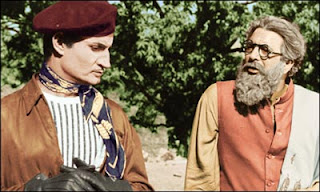 Kundan embodies the modern, progressive man of the day, and wants to cut back on labor and mechanize the business. He brings in new machinary, which requires lesser, but highly skilled operators from the city- leaving the majority of villagers jobless. He further introduces a bus that shuttles between the train station and the village, which makes for faster transport, but takes jobs away from local horse-carriage drivers.
The villagers beg and cajole Kundan to change his mind. He flatly refuses, but makes a bet with Shankar: Shankar will race his horse-carriage against Kundan's car, and should Shankar win, Kundan will remove the buses from the village. 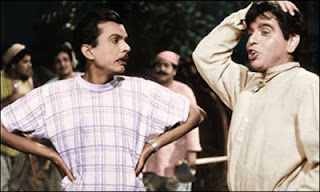 Aided by the villagers and a city reporter (Johnny Walker), of course Shankar's unprecedented win is in fact expected by the viewer- but the journey to ultimate victory makes the rest of the movie all that much worth-watching. 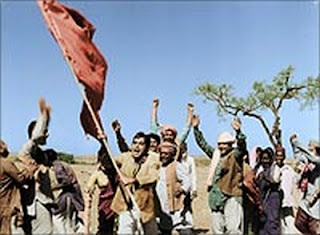 Also in the shadow of the main plot, we have a sub-plot of a love "quadrangle" of sorts: Ajit and Dilip love Vaijanti, who loves Dilip. Chand Usmani loves Ajit, who realises this by the time the movie ends. 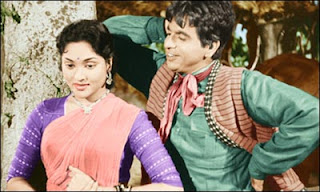 Aside from the obvious social comment on the need of post-independence India to maintain its agricultural roots while embracing industrialization, the movie comments on love for one's country and neighbor (hint, hint: newly created Pakistan and Bangladesh and omnipresent China). Vaijantimala fairly dazzles with her beauty, and it was actually rather fun to see Ajit in a non-out-and-out villainous role- he looks really handsome.

It was actually really refreshing to see this movie again. The color really made no difference- except perhaps to highlight the utter ridiculousness of Kundan's outfits- his wardrobe, in an attempt to be "western", is utterly overboard.

There are huge holes in the plot-we aren't told why Shankar's horse needs another road to run on, which the villagers spend days building- I discussed this with a race track guy (a friend) and a construction guy (a client), and in their opinion an unpaved road may have been better for the horse- but whatever. The movie has really lovely songs (must download), and a boisterousness all its own- reminds me of why I love Bollywood so very much.