A pair of dumb movies :) 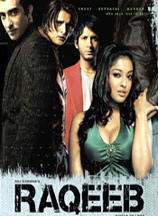 Oh my goodness! What an awful awful awfulllll waste of time this was! Someone (namely the director ) has to have been smoking something to even assume that this rubbish would make any sense.

Here is the plot: Remo (Rahul Khanna) is a eligible bachelor, who lives alone, but has the complete support of Siddharth (Sharman Joshi) his best friend and business partner. Sid sets Remo up with a blind date, Sophie (Tanushree Dutta) whom he ends up eventually marrying. What Remo does not know is that Sophie is having an affair with Sunny (Jimmy Shergil) behind his back. Sophie gets Sunny to shoot and kill Remo. 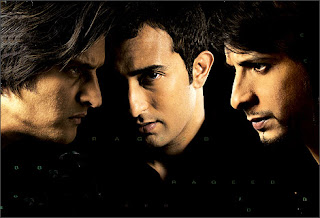 And then comes the twist in the tale- Sophie has been playing Sunny too- she is actually Sid’s girlfriend, and together they have managed to paint Sunny in a corner- his fingerprints are on the gun that shot Remo, and he goes to jail. 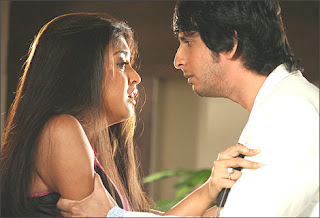 We are then (mis) treated to a flashback: Sid is actually Remo’s step-brother- his dad had left his mom to marry Remo’s mom, and which drove Sid’s mom to the dad’s murder and madness (huh? Yep, I agree). HOW actually, despite all this, Sid and Remo ended up best friends and business partners- we do not know (??!!). Regardless- Sid and Sophie are chilling somewhere in Mauritius when Remo- basically comes back. He didn’t quite die, and Sunny had blurted the truth to him and the police to save his own skin (WHYYY didn’t the police simply nab Sid ‘n Sophie??- Who cares??!!). 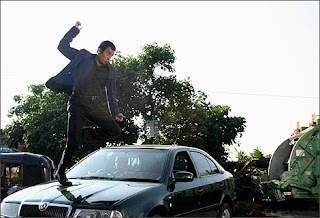 Lots of bloody fighting ensues, Sid and Sophie die in each other’s arms, and Remo decides to donate a bunch of money that will take care of Sid’s mom in her asylum. End of story.

How utterly idiotic! The cast is utterly disjointed, the dialogs are excretory, and no one apparently knows the basics of acting. Ms. Dutta compensates for lack of thespian skills by pouting and wearing wet, filmy outfits. Jimmy, normally a good-looking man, has strange blond high-lights that make him look really old. Sharman and Rahul are usually not bad actors- but here they have basically decided to desecrate whatever body of work they have managed to put together. What the heck were they doing in this movie anyway??? I give up…………………..

But apparently I didn’t give up entirely, since I tortured myself with yet another dumb movie: 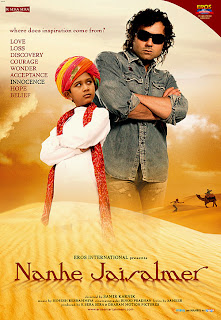 Nanhe (Dwij Yadav) is a guide in Jaisalmer, and takes visiting tourists on rides on his camel. He is ten and knows multiple languages owing to his job, but doesn’t go to school. He also has a fake-pretend friend: Bobby Deol, the movie star, playing himself. (COULDN’T they find ANYONE else???)
All he wants is to meet the matinee-idol, which happens one day when the star visits the desert city for a movie shoot. 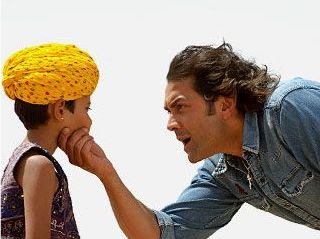 And they become friends….but hang on a minute- it’s apparently all in his head. Bobby may/may not have actually visited- but we do know that the “friendship” bit was all in Nanhe’s head. Anyways- all this somehow has inspired him to study, and he grows up to write the story of his experiences in novel format, that wins (what else?) the Bookers Award, which is presented to him by Bobby himself (assorted laughter, sniggers and giggles). 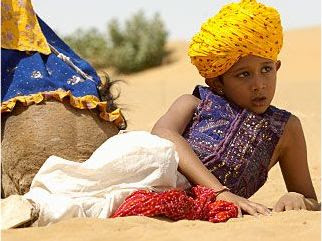 Oh man- so unintentionally funny! Bobby wears weird “rockstar” outfits, which when the credits rolled, I found had been designed by his own wife! WTH- is she trying to get a divorce? He looks terrible- aging and sagging, in tight outfits meant for a teenage-boy. Look for yourself: 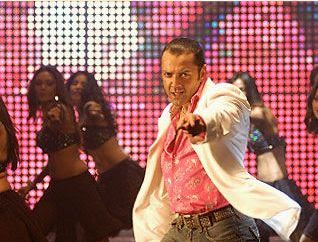 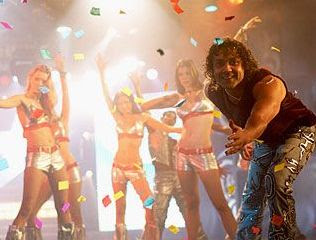 Dwij however is another story- he is a consummate actor, and stops the movie from becoming utterly despicable. Unfortunately for all of us, Bollywood (and for that matter, even Hollywood) has few movies that have kids in starring roles.
Posted by Shweta Mehrotra Gahlawat at 11:14 PM

You are so hilarious!!! This post had me rolling...I really didn't have any desire to see this film, but was a little curious since I kept seeing previews for it all last summer. Now I know I wasn't missing anything.

Thanks Nida- that is why I started writing- I find most movies utterly OTT and funny :D