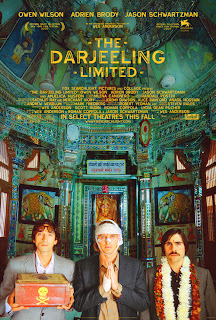 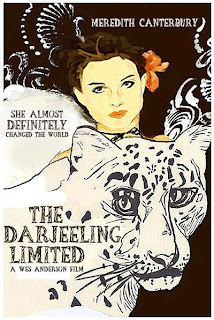 The Darjeeling Limited is a two-part movie. The first part, Hotel Chevalier, is a approximately 10 minute short, focusing on youngest Whitman brother Jack (Jason Schwartzman, Frank Coppola’s nephew, if you must know. Jack also co-wrote both parts) and his brief encounter with an ex-lover (Natalie Portman) in Hotel Chevalier, Paris. Jack, is a writer who draws upon his own experiences in his short stories, as we will come to know in Part II. Ms. Portman and Jason are quirky and funny; the short goes far in establishing Jason and his brothers’ characters in the actual film. 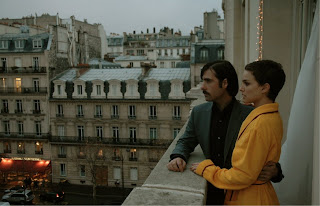 We next find Jack inside The Darjeeling Limited , a train bustling through Jodhpur (Rajasthan, India), where Francis (Owen Wilson) has summoned him and Peter (Adrien Brody). It has been one year after their father’s death, during which time they have lost touch with each other and their mother (Anjelica Houston), who has since joined a religious mission in India. Though they have no desire to pursue this trip (Peter has a pregnant wife at home, and Jack just wants to be by himself, writing), but both come dutifully when called, more out of sheer habit than enthusiasm. 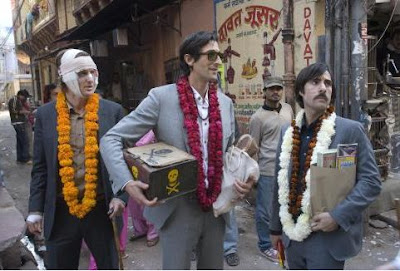 They eventually complete their journey, meet their mother, and come to terms with themselves and each other. The very last scene is the best- the 3 brothers run on the platform to catch yet another train, throwing aside their luggage that they have carted around through hill and vale throughout the movie, leaving it behind with bewildered porters. My friend Alice was the first among us to compare the juxtaposition against their letting go of the emotional baggage they had carted around all their lives. Entrancing.

So what makes this movie so great? The whole is greater than the sum of its parts: with a tight script, sincere acting, great shots and just-so editing, the movie is a sheer delight to watch. I can compare it to a sergeant pepper- Beatles’ song, or a surrealist Miro painting; montages flow together to make a humorous but intelligent comment on life and the decisions the three brothers choose to take. Truly one of my top ten this year.

Aside 1: The songs are good- “Champs Elysees” and “Where Do You My Lovely” make me smile. Some pieces are also borrowed from Satyajit Ray’s Apur Sansar and Pather Panchali.

Aside 2: The movie was shot extensively in and around Jodhpur (Rajasthan, India), which is almost prophetic, if not propitious- I am going on a driving tour of Rajasthan with my husband and dad-in-law (he rocks!) from Christmas through New Year's day- and will be in Jodhpur for 2 days...I think I'd like to break into a run like Brody....mmm.
Posted by Shweta Mehrotra Gahlawat at 9:29 PM