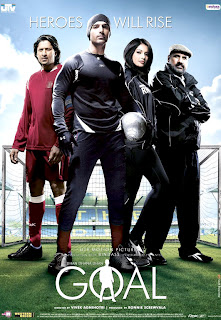 Title: Dhan Dhana Dhan Goal
Year: 2007
Cast: John Abraham, Boman Irani,, Bipasha Basu, Arshad Warsi
This movie isnt worth the reel it was filmed on.
I am SO disappointed in every individual involved- yes, Boman included.
The name and background (football) are of course lifted from Goal (2005). As for the plot:
Southall United is a football club in "Southall City", UK (yes yes, I know- but it is kinda nice to see the Southall neighborhood in the movie). A motley group of South Asians are club members- but the team hasnt won anything in 20+ years.
Then a threat appears in the form of Johnny Patel (Dilip Tahil, looking like NO Patel I've ever met- as a sports commentator and businessman and developer- how convenient isnt it?) joining hands with the corrupt city councilwoman (huh?) to replace the club with a mall. The club's owner has no money to renew the lease of 3M pounds at the end of 1 month (what the heck? didnt he realise his lease was running out???) or be kicked out. Also, most propitiously for our team, there is a national football games at the end of the month, which ironically has the SAME amount of 3M as the prize money (will wonders never cease?) 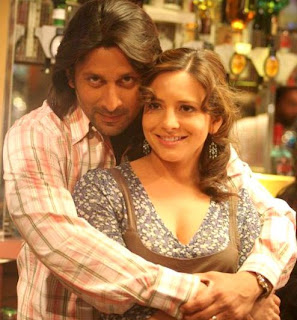 At this point, I almost wanted to walk away- but honor-bound to end what I started, I somehow continued with this disgrace of a movie. Shaan (a bloated Arshad Warsi), the team captain (and restanteur) takes matters in his own hands- he decides the way to win the games is to get a new coach (what IS a new coach expected to do in 1 month???)- so he drives around Southall what appears to be twice, enters a pub, and grabs Boman Irani- a ex-football player, who hasnt played in years, and is an alcoholic. What doesnt make sense is HOW Shaan figures an alcoholic is the team's best chance to win with 1 month of training. What also doesnt make sense is why initially Boman refuses, Shaan walks away without much pleading, and the next day Boman just shows up at the club, without another word. I understand macho silence, but the suspense isnt killing here- its just dumb.
The coach decides that the team must have a doctor- the minute he says this, Shaan's sister (Bipasha- at this point, I wasnt beyond caring about remembering names, and the movie isnt IMDBing- hah! new word!) walks through Shaan's restaurant (where they conveniently happen to be talking) serving drinks. A team member suggests they get Bipasha to be the team doctor- since she just got her medical degree (this movie has amaxing coincidences ALL the time, in case you havent noticed yet). Someone does ask why she would be doc to a team instead of working in a hospital- I'd like to know why, if she has trully got her degree, is she working as a server in a restaurant???? 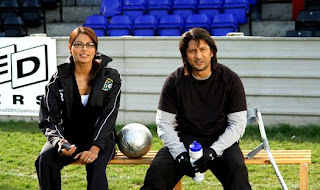 Whatever. scenes fly fast and adrupt now...
The coach next decides they need a "kit" and more money. Those appear right away as well. No plot development, no character development are in sight- nor are they expected anytime soon.
The coach also decides he needs a new hitter- the minute the words fly out of his mouth, Bipasha, who is standing next to him, walks him to another club- where Sunny (John Abraham, looking fine) is the star hitter for Southall's rivals, Aston, despite being from Southall, he is playing for another club, since Shaan rejected him years ago (when he was too young to play). As soon as Boman predicts Sunny will play with Southall, Sunny's teamates suddenly start passing racist slurrs etc. 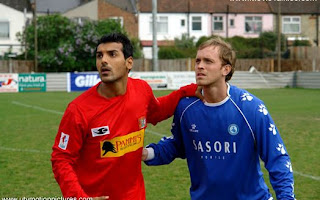 A little more of such nonsense, and Sunny does join Southall. But nope- another fly in the pointment- the team doesnt like Sunny (since he doesnt live with his parents (HUH?), played with a team of white guys (wth??) and therefore doesnt belong to his clan or country (wtf????????). Yes I know none of this makes a decimal-ounce of sense. Just concentrate on John's ripped abs here, and forget all else- it helps. 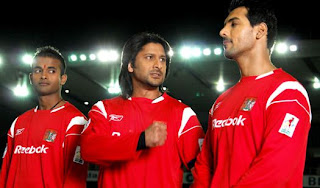 The shaky team is apparently all ready and winning games- when Sunny gets a better offer from another club, and leaves to join them, jsut before Southall's last and crucial match with Aston for the 3M (remember those?). Oh, and in between, Shaan's wife is preggers and Bipasha and John have begun to dance and kiss. 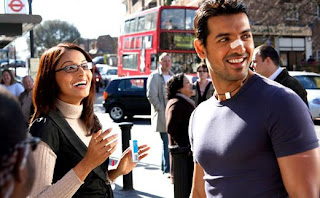 An hour before the game, Sunny find out that his semi-estranged dad was a huge Southall fan- until his heart (and body) were broken at a game by white supremacist type football lovers, while he was savign Boman (then a star player)'s life- of abotu 20 years ago.
Rather than take his dad to a psyciatrist, Sunny races to the game, just hops into a jersey lying around conveniently, and runs to join the game. Umm- what about game strategy? doesnt the coach need to regroup at least- assign new positions, explain defence and attack? oh whatever.. 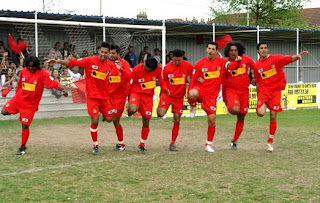 Nevertheless, the Sunny wins the day despite a broken nose and near-death expeiences. Bipasha is jumpy and happy. Boman is not an alcoholic anymore. Shaan has the baby he has long for forever. Sunny's dad is smiling for the 1st time in the movie- maybe the actor was just happy to see it over at last. Ditto for Sunny's mom, a older but alwasy cute Shernaz Patel.
End.
Do I need to reinstatehow HORRIBLE this was? Oh ok- I dont mind at all....You know a movie is bad when even John's abs cant save it. Its thankfully only about 2 hours long- perhaps if the director had allowed more time for character development, this would have been a better if longer movie. Little factual basis and bad dialogues (Boman is screeing during 90% of the screen time he gets) are the last nail in this coffin.
Posted by Shweta Mehrotra Gahlawat at 11:04 PM